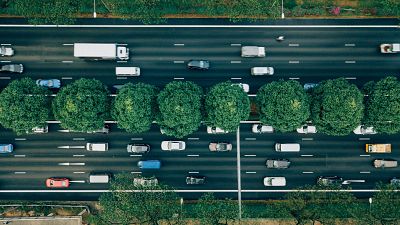 New research revealed the least and most congested cities in the world   -   Copyright  Chuttersnap / Unsplash
By Tom Bateman  •  Updated: 09/02/2022

You probably already noticed that the COVID-19 pandemic has changed a lot about the way we live our lives, but new data released on Wednesday shows just how much the coronavirus has changed our cities.

A survey of data collected by the navigation technology company TomTom revealed that traffic congestion in cities worldwide was 10 per cent lower last year than it was in 2019, with 283 of the 404 cities surveyed experiencing less traffic on average than they did pre-pandemic.

The drop in vehicle traffic was even more noticeable at rush hour, where congestion levels dropped by an average of 19 per cent, the survey found.

People also travelled at different times in 2021, the data showed. In North America, some cities saw rush hour move by two to three hours as travel habits changed, while in Europe traffic levels in the middle of the day were higher than they were in 2019.

The change in traffic patterns was down to the impact of COVID-19 changing working habits and boosting online shopping, TomTom said.

"The COVID crisis has acted as a catalyst that increased the speed of change in our way to consume. The last-mile sector is experiencing a massive transformation driven by increasing customer requirements who demand more immediate or same-day deliveries and return options," the company's vice president of travel and traffic Ralf Peter Schäfer said.

The 2021 Traffic Index also ranked the cities surveyed to find which were the most and least congested.

The world's worst congestion can be found in Istanbul, the data suggested, where the average driver spends 142 hours a year stuck in traffic.

Turkey's biggest city has a congestion level of 62 per cent, according to TomTom, meaning that average journey times were 62 per cent longer than they would be if the roads were clear.

At the other end of the table, Mecca in Saudi Arabia had an average congestion level of seven per cent in 2021, down from 11 per cent in 2019.

Bilbao in Spain was the least congested large city in Europe, with an average congestion level of 13 per cent - the same as in 2019.

The Basque city was followed by the Finnish capital Helsinki at 16 per cent - down three per cent on 2019 - and Katowice in Poland with a congestion level of 17 per cent.

Europe's least congested city overall was Almere in the Netherlands. Home to around 200,000 people, Almere's drivers spent 23 hours a year in traffic, according to the Traffic Index.

Another factor that lowered congestion levels throughout the pandemic could be a shift in journeys from cars and public transport to active transport like walking and cycling, TomTom said.

In London, where rush hour congestion was 13 power cent lower in 2021 than it was in 2019, transport authorities opened new bike lanes as the COVID-19 pandemic took hold in early 2020.

Figures from the British capital's transport agency, Transport for London (TfL), showed that the pandemic triggered a boom in walking and cycling, as people stayed away from public transport.

According to TfL, while central London saw a roughly 16 per cent fall in cycling volume compared to pre-pandemic levels, inner and outer boroughs - the parts of the city where most people live - saw increases of 4.6 per cent and 19.9 per cent, respectively.

Cycling, public transit and other modes of transport must take a larger share in transportation

The average proportion of journeys made by bike in 2021 was twice as high as it was before the pandemic, TfL said, although it was still relatively low at just 5.3 per cent.

However, the share of journeys taken by private vehicles in London also increased, rising from 36.8 per cent pre-pandemic to an estimated 41.7 per cent in 2020.

Shifting away from cars to other forms of transport is crucial for cities looking to improve their traffic situation, Schäfer said.

"To achieve a fundamental improvement, the modal split must be changed: cycling, public transit and other modes of transport must take a larger share in transportation," he said.

"Such a redirection is a political task that requires both high investment and bold political decisions – and it takes time".