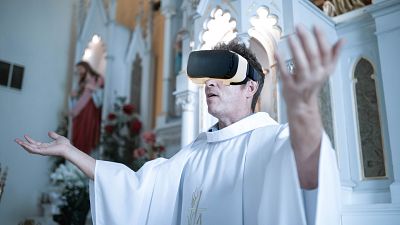 Image is a composite picture showing a priest wearing a VR headset. Churches are turning to the metaverse to bring the liturgy to a digital audience.   -   Copyright  Canva, Pexels
By Euronews and AP  •  Updated: 03/02/2022

VR Church is one of several evolving spiritual spaces in the metaverse that has seen a huge increase in size and popularity over the course of the COVID-19 pandemic.

Founded in the United States in 2016 by DJ Soto, a pastor based in Fredericksburg, Virginia, VR Church has seen its base of participants grow steadily year after year.

"Other people who identified with faith said hey I want to help out and volunteer and so there was like this epiphany where we were like, oh wait a minute we have this, I think we just planted a church, we started a church," said Soto.

When they increased services to every week, DJ Soto said it felt like a psychological shift.

"We are no different than any other church, whether it's physical or if it's in the metaverse," he said, explaining that they now "interact with hundreds of people in live worship. Our influence is certainly into the thousands".

First-time attendee Garret Bernal, who identifies as a member of the Church of Latter Day Saints, applauded and praised the build of the virtual reality church.

"I was able to go and read the verses, like especially these buildings over here, I was able to see a rendering of the verse I was reading, which made scripture much more meaningful for me".

Soto believes the future of churchgoing lies in the metaverse because "it reaches people who can't physically go to church," he said.

Alina Delp is one of those people. In 2010, she was diagnosed with a neurovascular condition that left her homebound.

"When you become chronically ill and you can no longer participate in what everybody else is doing, slowly but surely people fall away. So it's been just myself, my husband, and our cats," she said.

VR Church changed all of that, she believes.

VR better than being at a physical church?

Delp was ordained a pastor in VR Church and was one of many to be baptised there. However, some have questioned the validity of virtual sacraments, such as baptism, being done in the metaverse.

Theological reflections are like - our bodies matter in part because God came in human form and showed great compassion and empathy for the embodied human. So as we meet more and more in digital spaces, what are the implications for that? Christian theologians have not yet grappled with what that means when they're gathered in digital spaces.

"Theological reflections are like our bodies matter in part because God came in human form and showed great compassion and empathy for the embodied human," said Paul Raushenbush of Interfaith Youth Core.

"So as we meet more and more in digital spaces, what are the implications for that?”

"Christian theologians have not yet grappled with what that means when they're gathered in digital spaces," he added.

But while some question whether or not a church can truly exist in virtual reality, others find that the experience can be equal, and sometimes, better than a physical church.

"Many congregations - and this is all denominations, religions - think the building matters," said Jeremy Nickel, founder of Evolvr, a meditation space in the metaverse.

Soto explains that it's not about the avatars, or what they choose to look like, it's about the real spirit-to-spirit connection being made in the metaverse and in its spiritual spaces like VR Church.

"It's just wild what we can do now. I can't imagine in eight years what it's going to look like," he said.

Big Tech told it should reimburse victims of online scams