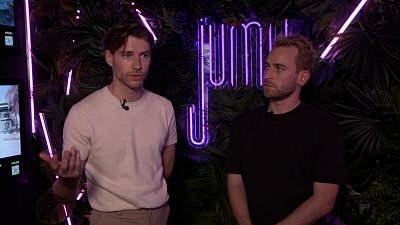 NFT, the abbreviation of non-fungible token, was Collins Dictionary’s term of the year in 2021. Having entered the mainstream, its usage increased 11,000%. As the concept has gained traction globally, so too did the associated scams.

In one example last year, NFT marketplace OpenSea advertised a fighting game called Evolved Apes as “a collection of 10,000 unique NFTs trapped inside a lawless land, fighting for survival… only the strongest ape will prevail”. The game never materialised and the anonymous developer, ‘Evil Ape’, vanished – along with the official website and Twitter account – after siphoning 798 ether (€2.3 million) from duped investors.

Why are people buying NFTs?
With NFTs, assets can be ‘tokenised’ to create a digital certificate of ownership, which can then be bought and sold. The practice is proving popular in fields ranging from computer gaming to digital art, but some buyers have fallen victim to fraud.

UAE-based NFT and cryptocurrency consultancy ColossalBit analysed the market and found multiple reasons why people are buying NFTs online, despite the risks.

“Some of them – we call them the ‘flippers’ – are buying NFTs to flip them for a profit,” says ColossalBit CTO, Christian Chalfoun. “Some are buying NFTs as collectors, and some just want to join a community.”

As the NFT metaverse expands, more companies are finding ways to use these digital tokens in business too. In December last year, The London Project was among the world’s first hospitality outlets to use NFTs. The Dubai-based restaurant created an NFT for an AED50,000 (€11,984) VIP New Year’s Eve party package for four. The restaurant partnered with blockchain technology company Cifris, selling the token through its website and accepting payment via MetaMask wallet.

Meanwhile, ColossalBit launched MetaTerrace in Dubai International Financial Centre (DIFC), a lounge that aims to bring the digital and physical world together in a nightclub setting where the metaverse community can meet in real life. Guests can make purchases using NFTs and cryptocurrencies, and visit virtual reality (VR) rooms where they can don VR headsets to experience alternate realities.

How to avoid the pitfalls of NFT investment
NFTs attracting large sums have stirred the interest of investors. In sport, NFTs for licensed NBA basketball game clips have amassed more than €220,000 to date. When Twitter founder Jack Dorsey auctioned the NFT for his first-ever tweet – "just setting up my twttr" – a Malaysia-based businessman paid €2.5 million for it. Digital artist Beeple (real name Michael Joseph Winkelmann) broke the record for the most valuable NFT when his collage Everydays: The First 5000 Days sold for €60.7 million at a first-of-its-kind auction at Christie’s. But very few traders make such ample profits.

“One of the mistakes I see is people buying an NFT and expecting it to sell it for millions,” says Chalfoun. “The second mistake is buying an NFT without doing the research and checking if [the item] is original.”

Anthony Monteard, the co-founder of NFT marketplace Jumy, agrees and warns would-be investors of the risk of fraud within the metaverse.

“There are a couple of people who steal identities from other creators,” explains Monteard. “They're going to take artworks and sell them on different platforms.”

Perhaps, then, "DYOR" will be Collins Dictionary’s term of 2022.

YouTube considers NFTs and watching games in the metaverse