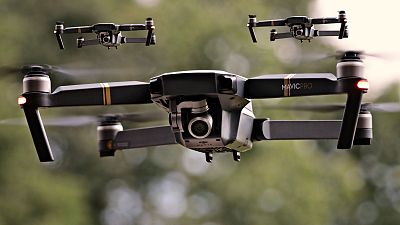 The use of drones by the French police was authorised by the country's Constitutional Court.   -   Copyright  Canva
By Ian Smith  with Reuters and AP  •  Updated: 23/01/2022

France’s Constitutional Court authorised the use of drones by the country’s police on Thursday, greenlighting measures that were passed by the French parliament in December 2021.

However, the court did censor the provision which allowed the use of drones in an emergency without prior authorisation from the prefect - the State-appointed regional representative - as it said it was in contravention of the country’s constitution.

The definition of these emergency cases was too broad, and did not allow the use of drones to be reserved "for specific and particularly serious cases," the court said in its decision.

It also objected to the municipal police being allowed to use them.

The proposed law wanted to authorise police to use drones for "sporting, recreational or cultural events" without there needing to be a risk of public order disturbances.

These provisions did “not ensure a balanced reconciliation" between the right to respect a person’s private life and the prevention of breaches of public order, the court ruled.

The International Committee of the Red Cross, which is best known for helping war victims, says hackers broke into servers hosting its data and gained access to personal, confidential information on more than a half-million vulnerable people.

The Geneva-based agency said the breach by unknown intruders this week affected the data of some 515,000 people, “including those separated from their families due to conflict, migration and disaster, missing persons and their families, and people in detention”.

It said the information originated in at least 60 Red Cross and Red Crescent chapters around the world.

“An attack on the data of people who are missing makes the anguish and suffering for families even more difficult to endure," Robert Mardini, the ICRC's director-general, said in a statement.

"We are all appalled and perplexed that this humanitarian information would be targeted and compromised”.

ICRC said the breach targeted an external contractor in Switzerland that stores data for the humanitarian organisation, and there was no indication the information had been publicly shared or leaked.

Agency spokeswoman Crystal Wells said that while the ICRC cannot say for certain that the records were stolen, "we feel it is likely. We know that they have been inside our system and have had access to our data".

Wells said the ICRC did not want to speculate about who might be behind the intrusion.

Addressing the person or people behind the hack, Mardini issued an appeal: "The real people, the real families behind the information you now have are among the world’s least powerful. Please do the right thing. Do not share, sell, leak or otherwise use this data”.

The ICRC said the breach forced it to shut down systems around its “Restoring Family Links” programme, which aims to reunite family members separated by conflict, disaster or migration.

Ewan Watson, an ICRC spokesman, said the organisation had never before experienced a hack of similar scale.

Twitter announced this week the launch of a new tool that allows users to showcase non-fungible tokens (NFTs) as their profile pictures, tapping into the digital collectibles craze that has exploded over the past year.

The feature, available on iOS to users of the company's Twitter Blue subscription service, connects their Twitter accounts to crypto wallets where the users store NFT holdings.

Twitter displays the NFT profile pictures as hexagons, differentiating them from the standard circles available to other users. Tapping on the pictures prompts details about the art and its ownership to appear.

Like other tech companies, Twitter is rushing to cash in on crypto trends like NFTs, a type of speculative asset authenticating digital items such as images, videos and land in virtual worlds.

Sales of NFTs reached some $25 billion (€22 billion) in 2021, according to data from market tracker DappRadar, although there were signs of growth slowing toward the end of the year.

Proponents of "Web3" technologies like NFTs say they decentralise ownership online, creating a path for users to earn money from popular creations, rather than having those benefits accrue primarily to a handful of tech platforms.

You asked (a lot), so we made it. Now rolling out in Labs: NFT Profile Pictures on iOS pic.twitter.com/HFyspS4cQW

Critics dismiss the decentralisation claims, noting that many of the services powering adoption of those technologies - like the six crypto wallets supported by Twitter's NFT product - are backed by a small group of venture capitalists.

In a widely circulated tweet after the launch, security researcher Jane Manchun Wong highlighted one of those links, showing how an outage at venture-backed NFT marketplace OpenSea temporarily blocked NFTs from loading on Twitter.

OpenSea did not immediately respond to a request from Reuters for comment.