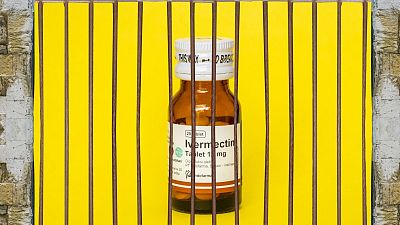 Four prisoners in Arkansas claim they were given ivermectin to treat COVID without their consent.   -   Copyright  Canva   -
By Ian Smith  with AP  •  Updated: 19/01/2022

A group of inmates in the US state of Arkansas are taking legal action against their jail and its doctor, claiming that they were given doses of the horse deworming drug Ivermectin to treat COVID-19 without their consent.

The lawsuit, which has been filed by the American Civil Liberties Union of Arkansas on behalf of the detainees, states they were told the alleged treatment consisted of “vitamins,” “antibiotics,” and/or “steroids”.

Ivermectin is approved for use in humans by the Food and Drugs Authority (FDA) in the US in small doses.

However, its approval was based on it being a treatment for ailments such as onchocerciasis (or river blindness), intestinal strongyloidiasis (an illness caused by roundworms), head lice and rosacea.

The European Medicines Agency (EMA) and Centers for Disease Control and Prevention (CDC) in the US have both warned against using Ivermectin to treat COVID-19.

What is alleged to have happened in the Arkansas prison?

The four plaintiffs said they were first given the pills in August 2021 after testing positive for COVID-19 and did not find out what they had actually taken until a few days later. Instead they were told they were being given vitamins, antibiotics or steroids.

“The truth, however, was that without knowing and voluntary consent, plaintiffs ingested incredibly high doses of a drug that credible medical professionals, the FDA, and the Centers for Disease Control and Prevention, all agree is not an effective treatment against COVID-19, and that if given in large doses is dangerous for humans," the lawsuit said.

The four inmates said they suffered side effects from taking the drug, including vision issues, diarrhoea and stomach cramps, according to the lawsuit.

"No one - including incarcerated individuals - should be deceived and subject to medical experimentation," said ACLU Arkansas legal director Gary Sullivan in a statement.

Ivermectin as a treatment for COVID

Dr Robert Karas, who has been named as a defendant in the case, has said he began giving Ivermectin at the jail in November 2020.

The state Medical Board has been investigating complaints against Karas over the jail’s use of Ivermectin, and is expected to discuss the investigation at its February meeting.

In a September letter sent by his lawyer, Karas told a Medical Board investigator that 254 inmates at the jail had been treated with Ivermectin.

In the letter, Karas said the information given to inmates about Ivermectin depended on who was administering it and that paramedics had not been given “required counselling details" to discuss with inmates about the drug.

Karas said the process had since been improved.

“Since the inception of the media coverage, we adopted a more robust informed consent form to assuage any concern that any detainees were being misled or coerced into taking the medications, even though they weren't," the letter said.

Karas has been a vocal proponent of using Ivermectin on his health facility’s Facebook page, the lawsuit said.

"Guess we made the news again this week," Karas Health Care said in a Facebook post on January 15.

"Still with the best record in the world at the jail with the same protocols. Inmates aren't dumb and I suspect in the future other inmates around the country will be suing their facilities requesting the same treatment we're using at WCDC - including the Ivermectin".

In another post he says how he has taken Ivermectin himself and given it to his family members. Karas mentions how he read information from Frontline Covid Critical Care Alliance (FCCA) that convinced him to start using the drug.

The FCCA is a controversial group of fringe doctors that was formed at the beginning of the pandemic. They have been accused of spreading COVID-19 disinformation.

Anti-vaccine conspiracy theorists have made unsubstantiated claims that the benefits of Ivermectin as a treatment for COVID-19 are being intentionally hidden as a way to push vaccines and other pharmaceuticals.

The drug has become somewhat of a lightning rod for the movement, with thousands of posts on Twitter repeating these false claims.

Pharmacy prescriptions for Ivermectin boomed last summer, and health officials in Arkansas and other states issued warnings after seeing a spike in poison control centre calls about people taking the animal form of the drug to treat COVID-19.

The CDC also sent an alert to doctors about the trend.

In August, Euronews Next found that Ivermectin was being promoted as a COVID-19 cure in Facebook groups and paid adverts hosted on the company's platforms.

Despite all the warnings, the drug has been touted by Republican lawmakers in Arkansas and other states as a potential treatment for COVID-19.