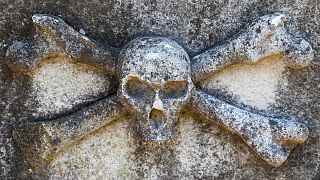 The 200-year-old mummified remains of children in Sicily are to be analysed using pioneering non-invasive methods to get a better understanding of the circumstances surrounding their deaths.

“Much work has been conducted on the adult mummies, but there is still much we don’t know about the children,” Dr Kirsty Squires, Associate Professor of Bioarchaeology at Staffordshire University and the lead researcher in the project, told Euronews Next.

“We are hoping to gain a better understanding of the age at death of the children, health and signs of disease, and possible cause of death. This will be coupled with the cultural attributes (e.g. clothing, and funerary artefacts) to gain an insight into their identity and how children were perceived by the living during the period in question”.

There are over 1,284 mummified and skeletonised bodies in the catacombs. They date back from the late sixteenth to early twentieth century.

Children were accepted in the catacombs from 1787 but while extensive research has been conducted on the mummified adults, the juvenile mummies have largely been overlooked.

How will the work be done?

The research team will use non-invasive technology to carry out the analysis. This mainly involves the use of x-rays. The plan is to examine 41 mummies and 14 radiographs will be taken for each body.

Anteroposterior and lateral scans (from head to toe) of each mummy will also be taken to estimate their age and sex, and to identify the cause of death.

Photography is not permitted in the catacombs so artist Eduardo Hernandez will create illustrations of the mummies included in the project.

The ethical questions of working with the dead

The idea of going into the catacombs and scanning and analysing the bodies of dead children may be disturbing to some.

Debates have raged for years on the rights of the dead and whether or not it is ethical to carry out research on them when they cannot and have not given consent.

The objections have often come from religious beliefs or based on historic grievances. But some also find it indecent to disturb a person’s final resting place.

Dr Squires says that ethics lay at the core of the team’s work.

“Firstly, we are using x-ray rather than autopsy to establish age at death, health status at the time of death and possible cause of death. This ensures the mummies are not damaged in any way,” she told Euronews Next.

“Secondly, photographs will only be taken for academic papers; they will not be taken and uploaded on to social media and a blog.

“Thirdly, when publishing our work no identifying information of the individual will be revealed. We work closely with the Capuchin friars to ensure our work is ethical and carried out in a respectful manner”.

Work on the project had been due to start already, but the COVID-19 pandemic delayed proceedings.

However, the team is hopeful to get going by mid-January where they will spend a week collecting the radiographs.