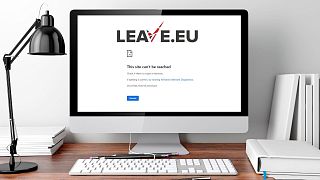 Over 48,000 British-held EU Internet domain names - including one owned by the Leave campaign - were taken offline indefinitely on Monday in the wake of Brexit.

EURid, the agency in charge of .eu domains, revoked Britons’ right to the domain name citing Brexit as the reason.

The process to remove the domains began following the formal withdrawal of the UK from the European Union in early 2020. The removal on Monday was the final step in the process.

To be eligible for a .eu domain, a person must be an EU citizen, a resident in a member state or an organisation established in the Union.

British holders were first notified that they would lose their domain in October 2020.

They were given time to comply with the rules. Any sites that were still not compliant by January 2021 were suspended before finally being revoked this week.

The curious case of Leave.eu

One of the high profile domains affected by the move was Leave.eu, the website of a political campaign group that was set up to support the UK’s exit from the EU.

Ironically, in a bid to save their domain name which would affect its brand and its Google search rankings, the group moved their website registration address to the Republic of Ireland, an EU member state, in January 2021.

This was opposed by Irish politicians whereby EURid proceeded with the suspension process when they said the group failed to respond to data verification requests.

What are the consequences of the move?

“You can really tell the lack of consequential thinking on behalf of the UK,” Hosuk Lee-Makiyama ,the director of the European Centre for International Political Economy, told Euronews Next.

“But also on the side of people who are pointing this out almost with schadenfreude against the UK and amongst the people who are advocating for Remain, because actually to require a local presence or citizenship when it comes to domain names is something that we sometimes consider to be a trade barrier”.

However, Lee-Makiyama doesn’t believe that the commercial consequences are very serious as the .eu domain is often a secondary domain for companies.

For him it's the principle of the move that is more interesting as he believes it's not in the best interest of either the UK or the EU.

Could a ‘Golden Visa’ offer you a ticket to a new life in Europe?

How the metaverse conquered Christmas