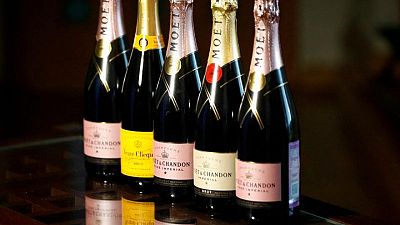 <div> <p><span class="caps">BRUSSELS</span> – The European Union’s exports of sparkling wine to the rest of the world fell last year for the first time in a decade, Eurostat said on Friday, largely because of a massive drop in champagne sales, though prosecco and cava sold well.</p> <p>The <span class="caps">COVID</span>-19 pandemic dampened wine trade globally in 2020, the latest year for which data are available, as restaurants and bars remained closed for long periods.</p> <p>Champagne was hit the hardest. Sales outside the EU of the famed French sparkling wine fell over 20% by volume to 66 million litres in 2020 from nearly 84 million litres the previous year.</p> <p>That largely contributed to a 6% overall drop in EU exports of sparkling wines last year compared to 2019, the Eurostat data showed.</p> <p>EU exports fell from a peak of 528 million litres in 2019 to 494 million litres in 2020 – still nearly twice the level recorded in 2010.</p> <p>Of the three main categories of sparkling wine exported from the EU, only champagne recorded a significant drop by volume.</p> <p>Prosecco, which is by far the most exported, recorded sales outside the EU of 205 million litres in 2020, compared to nearly 207 million litres in 2019.</p> <p>Cava, which is produced in Spain, bucked the trend by increasing its extra-EU exports by more than 10% to 58 million litres in 2020, getting closer to replacing champagne as the second most sold EU sparkling wine outside the 27-nation bloc. </p> <p>Total champagne sales, including in the EU, fell 18% last year by volume, producers’ group <span class="caps">CIVC</span> has estimated.</p> <p>Despite the drop in sales by volume, vintage champagnes have proven a lucrative draw for investors this year, outperforming all major financial market assets from Big Tech to bitcoin. Salon le Mesnil’s 2002 vintage surged more than 80% in value in 2021 on online platforms.</p> <p/> </div>