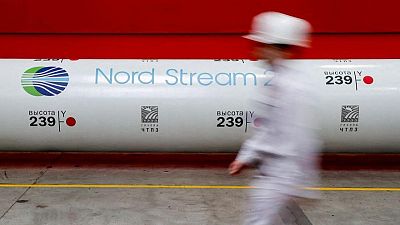 <div> <p><span class="caps">MOSCOW</span> – Russian President Vladimir Putin said on Wednesday the Nord Stream 2 undersea gas pipeline would help to calm a surge in European gas prices and was ready to start exports now a second stretch of the pipeline has been filled.</p> <p>Nord Stream 2, completed in September but awaiting regulatory approval from Germany and the European Union, faces resistance from the United States and several countries including Poland and Ukraine, which say it will increase Russia’s leverage over Europe.</p> <p>The pipeline had been scheduled to be completed in 2019, but construction was suspended following the threat of sanctions by the U.S. administration of Donald Trump and the subsequent withdrawal of the Swiss-Dutch company Allseas from pipe-laying.</p> <p>Russia had to complete it with its own fleet.</p> <p>Putin said on Wednesday the second stretch of the twin pipeline has been filled with gas.</p> <p>“I’d like to congratulate Gazprom and your partners in Nord Stream 2 on the completion of work and the creation of this additional large trunk-route and that it is ready for work,” Putin told a government meeting, attended by the head of Gazprom Alexei Miller.</p> <p>The $11 billion pipeline has been built by the Kremlin-controlled gas giant Gazprom and half of the cost has been paid by European energy companies, namely Germany’s Uniper and <span class="caps">BASF</span>’s Wintershall Dea, international oil major Shell, Austria’s <span class="caps">OMV</span> and France’s Engie.</p> <p><span class="caps">LONG</span> <span class="caps">WAIT</span> <span class="caps">FOR</span> <span class="caps">APPROVAL</span></p> <p>The certification of the link along the bed of the Baltic Sea from Russia to Germany is not expected before the end of the first half of 2022.</p> <p>Europe has seen natural gas prices hit record highs as economic recovery and robust energy demand has strained supplies.</p> <p>Some politicians and experts have blamed Russia for restraining its gas exports as the wait continues for regulatory approval and a broader standoff with the West plays out over Ukraine, which fears Moscow will launch a military invasion. Russia has denied plans to attack Ukraine.</p> <p>Putin said the launch of Nord Stream will reduce gas prices in Europe as well as in Ukraine by increasing gas supplies.</p> <p>“This, for sure, will have an immediate impact on price on the market, on the spot. And all the countries, the consumers in those countries that consume the Russian gas, of course, will feel it themselves,” Putin said.</p> <p>Upward pressure on Europe’s gas prices has increased following the flow reversal in the Yamal – Europe pipeline, another major route for the Russian gas to Europe, to eastward earlier this month.</p> <p>The gas flowed from Germany to Poland via the pipeline for a ninth straight day on Wednesday, data from German network operator Gascade showed.</p> <p/> </div>