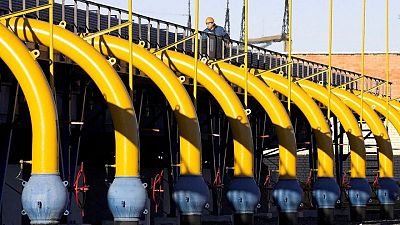 <div> <p>By Vladimir Soldatkin</p> <p><span class="caps">MOSCOW</span> -A pipeline normally bringing Russian gas into western Europe flowed in reverse for a seventh day on Monday, a situation Moscow blames on German speculation, despite surging European heating costs.</p> <p>President Vladimir Putin said last week that Germany was reselling Russian gas to Poland and Ukraine rather than relieving an overheated market, pointing the finger at German gas importers for the reversal and rocketing prices.</p> <p>European power prices have risen due to a dramatic increase this year in the cost of gas, which is used to generate electricity as well as heat homes during the winter months. </p> <p>It was not immediately clear precisely where the gas that was flowing eastwards through the Yamal-Europe pipeline originated from, beyond a mixture of sources in Germany. </p> <p>German network operator Gascade’s data showed flows at the Mallnow metering point on the German-Polish border were going east into Poland at an hourly volume of nearly 1.2 million kilowatt hours (kWh/h) on Monday.</p> <p>Auction results also showed Russian gas exporter Gazprom had not booked gas transit capacity for exports via the Yamal-Europe pipeline for Monday.</p> <p>Gazprom said it has no plans to hold auctions for spot gas sales on its Electronic Sales Platform this week.</p> <p>Gascade, which imports Russian gas and transports it within Germany, is owned by <span class="caps">WIGA</span>, a Gazprom and Wintershall <span class="caps">DEA</span> joint venture. Oil and gas firm Wintershall is co-owned by German chemicals group <span class="caps">BASF</span> and Russia’s LetterOne.</p> <p>Gazprom spokesman Sergey Kupriyanov said on Saturday that the company was ready to supply additional gas within its long-term contracts, which would be cheaper than short-term deals concluded on European spot market.</p> <p>Reverse flows from Germany to Poland, and probably to Ukraine, were between 3 million cubic metres (mcm) and 5 mcm per day, he said, again rejecting allegations that Gazprom was undersupplying gas as “groundless”.</p> <p>Germany’s Economy Ministry has declined comment on Putin’s remark. Gas importers have not replied to requests for comment.</p> <p>Data from Slovak pipeline operator Eustream showed capacity nominations for Monday’s Russian gas flows from Ukraine to Slovakia via the Velke Kapusany border point were at 731,574 megawatt hours (MWh), roughly stable with levels seen since Friday, but below levels seen earlier in December. </p> </div>