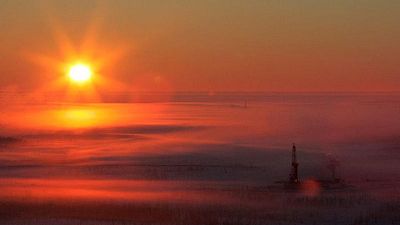 <div> <p>By Olga Yagova and Gleb Gorodyankin</p> <p><span class="caps">MOSCOW</span> – Russia has placed its bets on its biggest oil project since the fall of the Soviet Union to push aside rival Middle Eastern, West African and U.S. grades in core European markets and provide much-needed revenues.</p> <p>The Rosneft-led project Vostok Oil in Russia’s new northern oilfields is expected to produce and export as much as 2 million barrels per day (bpd) by 2030 – a level matched by the Samotlor West Siberian field in the 1970s and 80s.</p> <p>The production, comparable with the entire North Sea oil market of between some 1.8 million and 2 million bpd, will come onstream in stages.</p> <p>Vostok Oil’s loading terminal, the Bukhta Sever, in the Yenisei Bay on the Taymyr peninsula will ship 600,000 bpd when finished in 2024, or around 15% of Russia’s total and equal to current loadings from Russia’s largest Baltic sea port of Primorsk.</p> <p>The year 2024 is when President Vladimir Putin, a close ally of Rosneft <span class="caps">CEO</span> Igor Sechin, is expected to run for re-election.</p> <p>Any revenue boost would be especially welcome to help finance a $400 billion state spending plan Putin aims will make Russia one of the world’s top economies by the end of this decade.</p> <p><span class="caps">NEW</span> <span class="caps">GRADE</span></p> <p>Demand for oil, however, is uncertain as the world seeks to wean itself off fossil fuels to limit global warming and many European refiners are expected to decrease runs.</p> <p>Russia is aiming to meet the demand it expects to remain with its new light, low sulphur, easy-to-refine grade – distinct from its flagship heavy Urals grade.</p> <p>To attempt to address buyers’ concerns about sustainability, Rosneft says it is reducing its environmental impact by using wind power and associated gas to power the oil extraction operations.</p> <p>In a reply to a Reuters request, Rosneft said that the project, with global commodities traders Vitol and Trafigura among shareholders, was “successfully developing in line with an approved schedule,” and refused to provide further details. </p> <p>The quality of the new Vostok crude grade, which has yet to be named, will be similar to that of North Sea grades Brent and Troll. </p> <p>It will have sulphur component of less than 0.05% and a density of about 40 American Petroleum Institute (<span class="caps">API</span>) degrees, according to Rosneft, making it suitable for most refineries in Europe.</p> <p>As North Sea oil production from mature fields has declined, European refiners have purchased light sweet barrels from outside the region.</p> <p>Traders said they could well favour the new Vostok crude, provided it is of the expected quality, over the Middle Eastern, African and U.S. grades they have been buying because transport costs would be lower.</p> <p/> </div>