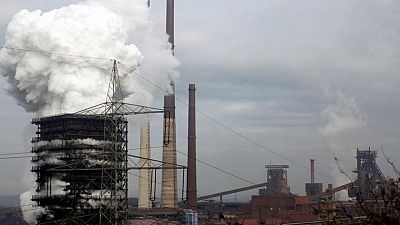 <div> <p>By Kate Abnett and Susanna Twidale</p> <p><span class="caps">BRUSSELS</span> – Energy intensive industries have urged the European Union to address soaring energy prices, saying the record costs have hit their competitiveness and could prompt European companies to relocate.</p> <p>Extending months of price rises, European gas hit record levels this week in response to low storage, cooler temperatures and fears over supply from Russia. </p> <p>The Dutch front month contract reached 184.95 euros per megawatt hour on Tuesday, having increased by more than 800% since the start of the year.</p> <p>The gas price surge has inflated Europe’s power costs, also stoked to a lesser extent by CO2 permit prices and reduced French nuclear capacity, leading some industries to curtail production. </p> <p>Benchmark German front-year power prices are around 500% higher than at the start of the year.</p> <p>“A prolonged period of unbearably high energy prices could lead to severe losses, relocation of European companies and an increase of carbon leakage,” a group of European industry associations, among them cement group Cembureau, metals group Eurometaux, steel lobby Eurofer and Fertilizers Europe, said in a statement on Wednesday.</p> <p>“Urgent actions are necessary at EU level to enable affected companies to overcome this situation, which is expected to last several months more, and continue investing in energy transition in Europe,” the groups said.</p> <p>Carbon leakage would occur if companies left Europe to avoid paying for their emissions via the EU carbon market. Carbon permit prices have more than doubled this year, and the industry groups called for a reform of the market.</p> <p>Around 20 of the EU’s 27 member states have rolled out emergency measures in response to the price surge, including energy tax reductions and subsidies for consumer bills.</p> <p>EU countries are largely responsible for their national energy policy, but some want Brussels to reform how Europe sets electricity prices, to link them more closely to each nation’s generation mix. </p> <p>Currently, power prices are set by the ultimate generation plant needed to meet demand – often, a gas plant.</p> <p>Brussels has said the best defence against the volatile price of imported fossil fuels is for countries to shift to low-carbon, locally produced energy, as laid out under the EU’s climate change goals.</p> <p/> </div>