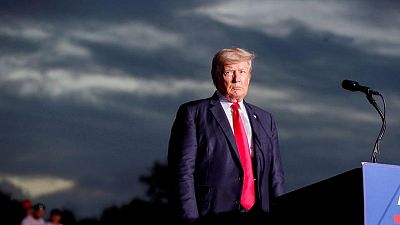 <div> <p><span class="caps">NEW</span> <span class="caps">YORK</span> – Former U.S. President Donald Trump’s new venture inked the second-largest ever private placement with convertible stock for a merger with a blank-check acquisition firm, according to <span class="caps">SPAC</span> Research, thanks to its unusually favorable terms and despite not having yet launched its social media app. </p> <p>None of the 36 investors that participated this month in the $1 billion capital raise, many of them hedge funds and family offices, have revealed their identities. Many of them fretted about publicly associating with Trump, who was banned from Facebook and Twitter for encouraging the protests that preceded the Jan. 6 attack on the U.S. Capitol, sources have told Reuters.</p> <p>The structure of the so-called private investment in public equity (<span class="caps">PIPE</span>) was atypically favorable to these investors, even though they could end up paying more than three times what investors in the blank-check acquisition firm’s initial public offering in September paid, according to industry experts.</p> <p>This is because they will be allowed to sell their shares right after the merger of the former president’s Trump Media & Technology Group (<span class="caps">TMTG</span>) and the blank-check acquisition firm, Digital World Acquisition Corp, is completed, rather than a few months later as is customary. </p> <p>They will be entitled to buy the shares at a 40% discount to where the shares have traded, on average, in the 10 days following the deal’s completion, with a ceiling of $33.60 per share and a floor of $10 per share, according to the terms of the deal.</p> <p>Those investors can sell the shares immediately once the deal closes to lock in a profit. That selling would exert downward pressure on the share price. If the stock falls enough, they could get more shares based on the deal’s formula, which they can sell again, in a trade that Wall Street refers to as a “death spiral” for the company’s stock.</p> <p>The merger, however, has proved popular with day traders and Trump supporters who invest in so-called “meme stocks.” It’s possible that enough of them will buy the stock to cancel out the impact of the <span class="caps">PIPE</span> investors dumping their shares.</p> <p>Another perk afforded to the <span class="caps">PIPE</span> investors that is not seen in other such deals is the right to short the stock. That also allows them to lock in profits because they can borrow shares, sell them instantly, and then receive the shares they are entitled to at a discount after the merger closes so they can close out their positions.</p> <p/> </div>