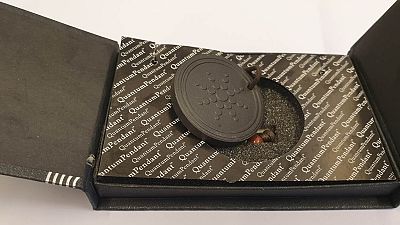 The Quantum Pendant's makers claim that their products "protect" against radiation. Dutch nuclear safety authorities say this actually emits it.   -   Copyright  National Institute for Public Health and the Environment
By Tom Bateman  •  Updated: 20/12/2021

If you're wearing a so-called "Quantum Pendant" or "negative ion" bracelet, you should take it off right now because it could be emitting ionising radiation.

Last week, the agency issued a warning to owners of ten jewellery items which it found exposed wearers to low levels of radiation. The warning advises that they take off the items and "store them away safely" while the ANVS decides how best to dispose of them.

Ironically, many of the products featured in the nuclear safety agency's warning claim to protect wearers from radiation.

The maker of the Quantum pendant claims that its products "shield you from the harmful EMF (electromagnetic field) and 5G rays we come in contact with every day".

There is no evidence to support this claim.

While the ANVS found the products emitted low levels of radiation, wearing them for extended periods could still expose individuals to health risks including tissue and DNA damage, the agency said.

"Someone who wears a product of this kind for a prolonged period (a year 24 hours a day) could expose themselves to a level of radiation that exceeds the stringent limit for skin exposure that applies in the Netherlands," it added.

A growing number of conspiracy theories surrounding 5G has fuelled a market in fake products claiming to "protect" users.

Last year, the BBC reported that trading standards authorities in the United Kingdom had taken action against a €400 USB stick that claimed to offer protection against 5G via a "holographic nano-layer catalyser".

However, investigations showed that it was simply a normal USB stick.

What are the products?

The list of ten products found to emit ionising radiation includes a sleep mask, necklaces that claim to have a "negative ion effect" and a "smiley" anti-radiation bracelet for children.

The ANVS's findings mean the products are now illegal to sell in the Netherlands as they violate the country's Nuclear Energy Act, but that hasn't stopped the makers from continuing to sell them elsewhere.

Frankfurt-based Magnetix Wellness, the maker of four radiation-emitting products on the banned list, continues to advertise them on its website. While it does not sell directly to customers in the Netherlands, at the time of writing it offers shipping to Germany, Sweden and the United Kingdom.

Euronews Next contacted Magnetix Wellness to ask why these products were still on sale, but did not receive a response.

At the time of publication, the Quantum pendant identified as being a source of ionising radiation was still available through sellers on some international Amazon sites, including Amazon Japan.

The ANVS said it was unable to impose bans on traders located outside the Netherlands, but added that it would share information on the radioactive items with the relevant authorities wherever possible.

The items identified by the ANVS as emitting ionising radiation are:

According to the ANVS, owners of any of these products should stop using them immediately and store them in a safe place. Ideally, this means placing them back in their original packaging and shutting them inside a closed cabinet, the agency said.

As they "contain radioactive materials or waste," owners are advised not to throw the products away, and instead to wait for instructions from the ANVS.