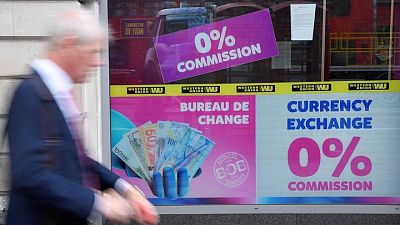 <div> <p><span class="caps">LONDON</span> -The British pound fell to a three-day low on Monday, struggling to hold above $1.32 against the dollar as a risk-off mood swept through financial markets and as pressure grew on policymakers to slow the spread of the Omicron coronavirus variant.</p> <p>Britain has reported record levels of <span class="caps">COVID</span>-19 cases, with officials warning that the full effects of the latest wave are yet to be seen. Prime Minister Boris Johnson held a meeting of senior ministers to discuss the situation.</p> <p>The meeting comes in the backdrop of growing public anger at media reports of government officials holding gatherings and parties when Britain was under lockdown last year, raising doubts about Johnson’s authority within his Conservative Party.</p> <p>“Boris Johnson’s government is a mess now with a series of issues and the by-election loss recently, combined with resignations and now <span class="caps">COVID</span> related restrictions in the short term could see the pound soften up some more on these issues,” said Brad Bechtel, global head of FX at Jefferies <span class="caps">LLC</span>.</p> <p>Against the dollar, the pound, edged 0.1% lower at $1.3224. Versus a resurgent euro, the pound weakened by 0.6% to 85.43 pence.</p> <p>At current levels, the pound has erased all its gains sustained on the back of the Bank of England unexpectedly raising interest rates last week. </p> <p>“Support from the blindsided BoE action in raising rates was only temporary with focus more on Omicron and government disarray,” <span class="caps">NAB</span> strategists said. </p> <p>Deputy Prime Minister Dominic Raab said on Monday he could not make any guarantees when asked whether the government would impose further restrictions before Christmas.</p> <p>Latest positioning data showed investors remained uniformly bearish on the British currency with short pound bets at their highest levels since October 2019. </p> </div>