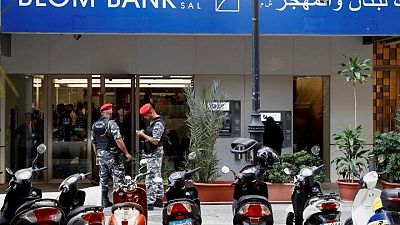 <div> <p><span class="caps">BEIRUT</span> – A British court ruled on Friday in favour of a Lebanese bank in a case brought by a depositor barred from transferring funds abroad because of capital controls in place since Lebanon’s financial system collapsed in 2019.</p> <p>The court ruled that <span class="caps">BLOM</span> Bank could be considered to have discharged its debt to the plaintiff, Bilal Khalifeh, by issuing a cheque in Lebanon. </p> <p>Banks have imposed tight controls on accounts, including a de facto ban on transfers abroad and local withdrawals of dollar-denominated deposits in dollars, but the controls have been challenged in Lebanese and international courts.</p> <p>Banks have sought to discharge dollar-denominated funds via banker’s cheques which cannot be cashed out in dollars and are instead sold on the market at a discount of about three-quarters of their value. </p> <p>The ruling by London’s High Court of Justice, Queens Bench Division, said <span class="caps">BLOM</span> Bank was under no obligation to transfer some $1.4 million in Khalifeh’s savings abroad and could be considered to have discharged his account via a cheque deposited with a notary. </p> <p>“The debt due from the Bank was payable in Lebanon and… Mr Khalifeh had no contractual right to require the Bank to transfer funds abroad,” it said. </p> <p>Khalifeh told Reuters he would appeal the ruling.</p> <p>In a separate case last month, a French court ordered Lebanon’s Saradar Bank to pay $2.8 million to a client residing in France, saying payment via cheque in Lebanon was not valid. </p> <p>In that case, the documents opening the account were signed by the plaintiff in Paris. Khalifeh did so in Lebanon. </p> <p>“This judgement means that <span class="caps">BLOM</span> Bank can continue to treat all depositors equally in terms of international transfers and cash withdrawals, irrespective of the size of their deposits and their place of residency,” <span class="caps">BLOM</span> Bank said in a statement. </p> <p/> </div>