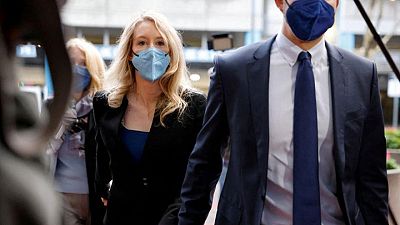 <div> <p>By Jody Godoy</p> <p><span class="caps">SAN</span> <span class="caps">JOSE</span>, Calif. – A U.S. prosecutor told jurors on Thursday that Theranos founder Elizabeth Holmes lied to investors to obtain critical funding for her blood-testing startup, while her lawyer argued that she never meant to deceive anyone.</p> <p>Holmes, 37, is on trial in San Jose, California, in a case that has shed light on Theranos’ failed endeavor to revolutionize lab testing with small machines that used only a few drops of blood. </p> <p>“She chose fraud over business failure. She chose to be dishonest,” Assistant U.S. Attorney Jeff Schenk said at the start of closing arguments. “That choice was not only callous, it was criminal.”</p> <p>Holmes’ attorney Kevin Downey told jurors that the government’s case was misleading and incomplete.</p> <p>“The picture can change quite a good deal as a result of waiting for the full story,” Downey said during his closing argument. He said prosecutors had not given them information about Theranos’ successful projects with drug companies, which were included in Holmes’ defense case.</p> <p>Theranos was once valued at $9 billion and vaulted Holmes to Silicon Valley fame. Wealthy private investors including media mogul Rupert Murdoch invested millions in the company after meeting with the founder, who was known for her Steve Jobs-like black turtleneck.</p> <p>Theranos collapsed after the Wall Street Journal published a series of articles starting in 2015 that suggested its devices were flawed and inaccurate. Holmes was indicted in 2018.</p> <p>Schenk, the prosecutor, recapped testimony from more than two dozen witnesses, including patients who had received inaccurate results from Theranos tests for <span class="caps">HIV</span> and cancer.</p> <p>He recalled testimony from six investors that Holmes gave them false impressions that Theranos devices could carry out a broad range of tests and that they were being used by the U.S. military in the field. </p> <p>Statements to investors and patients form the basis for nine counts of fraud. Holmes also faces two counts of conspiracy.</p> <p>Before finishing his argument, Schenk called on jurors to scrutinize Holmes’ testimony, during which they saw encouraging emails telling her the company’s technology worked. Holmes had also received emails with negative information from employees, including on test accuracy. But investors heard only the positive information, he said.</p> <p>“There’s another word for that, and that’s intent,” he said.</p> <p>Downey agreed that Holmes’ intent was the “critical issue” in the case, and told jurors that Holmes relied on positive internal feedback about Theranos’ technology when she talked about the company publicly.</p> <p>He emphasized that Holmes had sought approval for Theranos’ devices and said that when problems became apparent she brought in outsiders to fix them.</p> <p>“Are those the actions of someone who had been engaged in a conspiracy to defraud people?” he asked.</p> <p/> </div>