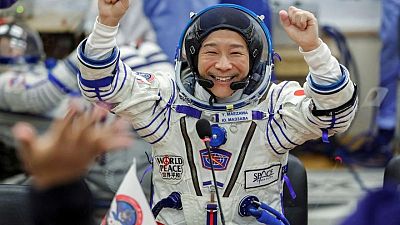 <div> <p>By Sam Nussey</p> <p><span class="caps">TOKYO</span> – SoftBank Group Corp founder and <span class="caps">CEO</span> Masayoshi Son said he spoke by phone to fashion magnate and protege Yusaku Maezawa, who is currently on a trip to the International Space Station. </p> <p>“Maezawa called my mobile but it cut out!! I tried to call him back but he was out of range,” Son posted to his 2.9 million Twitters followers late on Wednesday. </p> <p>“Maezawa’s call to my mobile connected!! It’s great he’s doing well!!” Son wrote in a follow-up post, making liberal use of red punctuation marks favoured by older Japanese mobile users. “It’s wonderful when dreams come true!!” </p> <p>Maezawa, 46, has a long relationship with Son, 64, and made his fortune with online fashion retailer Zozo, which was bought by SoftBank’s internet business in 2019. </p> <p>The co-chief of that firm, Kentaro Kawabe, also had a call from Maezawa that he took while in the bath, according to a video posted on Twitter. </p> <p>While Son and Maezawa share a taste for feel-good statements on social media, the younger billionaire’s penchant for conspicuous consumption, with the <span class="caps">ISS</span> trip a precursor to a voyage around the moon with SpaceX, contrasts with Son’s modest public appearance. </p> <p>Maezawa has also stepped away from frontline business leadership even as Son pushes back retirement to focus on investing in hundreds of startups through his Vision Fund. </p> <p>Maezawa has posted prolifically from space on social media, including to his 11 million Twitter followers, telling about daily <span class="caps">ISS</span> life – brushing his teeth in space and using a zero gravity toilet – and sharing aspects of his life journey. </p> <p>In one YouTube video Maezawa teared up talking about hit manga “Space Brothers”, which depicts a near-future in which two Japanese siblings pursue a childhood dream of going to space. </p> <p>Maezawa, who fulfilled his own dream with this trip, has a copy of the manga with him on the <span class="caps">ISS</span>. The series presents an optimistic vision of space travel where Japan plays a key role. </p> <p/> </div>