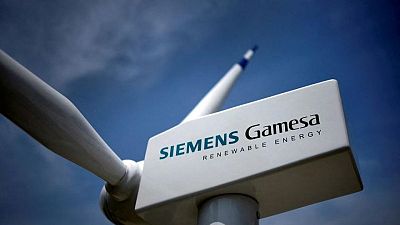 <div> <p>By Isla Binnie and Emma-Victoria Farr</p> <p><span class="caps">MADRID</span> – Wind turbine maker Siemens Gamesa is expecting initial bids on Friday for the wind farm development unit it is looking to sell as it focuses on returning its core business to profitability, sources familiar with the matter told Reuters.</p> <p>A deal could be worth 300 million euros ($340 million) or more, they said.</p> <p>Countries are clamouring for renewable energy infrastructure to help curb climate change, but wind turbine makers are struggling to protect their profits from rising steel prices and logistical logjams linked to <span class="caps">COVID</span>-19.</p> <p>This is piling pressure on turbine makers’ margins, which were already thinning as governments phase out subsidies. </p> <p>Siemens Gamesa, formed by the 2017 merger of Spain’s Gamesa with the wind division of Germany’s Siemens, is looking to make money out of its site development business.</p> <p>The bidders will be vying for a pipeline of projects with capacity of more than 3 gigawatts (GW) in Spain, France, Italy and Greece, and a team of some 50 staff, the sources said.</p> <p>In November, Chief Executive Andreas Nauen had said the company was “seeking to monetise” its development pipeline.</p> <p>The sources said the company had hired Bank of America to advise it on ways to do so and bidders were lining up to submit non-binding offers on Friday.</p> <p>Siemens Gamesa declined to comment.</p> <p>The deal value would likely be worth 250 million to 300 million euros, the sources said, although two of them said the company could pocket as much as 500 million euros for the assets. </p> <p>Among companies who may be interested in bidding are renewable energy developer Cubico, Spanish energy firms Repsol and Naturgy, the infrastructure and real assets arm of global giant Macquarie, and utilities including Portugal’s <span class="caps">EDP</span>, Austria’s Verbund, and Spanish peer Iberdrola, the sources said. </p> <p>Cubico, Repsol, <span class="caps">EDP</span>, Naturgy, Macquarie and Iberdrola declined to comment. Verbund did not immediately respond to requests for comment. </p> <p>Appetite for these types of assets was made clear when French buyers Engie and Credit Agricole snapped up Spanish renewable developer Eolia for 2 billion euros.</p> <p>Fellow turbine maker Nordex netted 402.5 million euros from selling its project pipeline to German utility <span class="caps">RWE</span> last year. </p> <p>Siemens Gamesa’s parent group Siemens Energy became frustrated with the turbine unit’s financial woes this summer and considered taking control of the 33% it does not already own.</p> <p>Siemens Energy <span class="caps">CEO</span> Christian Bruch said in November that Siemens Gamesa had made noticeable progress in the turnaround effort.</p> <p>($1 = 0.8835 euros)</p> <p/> </div>