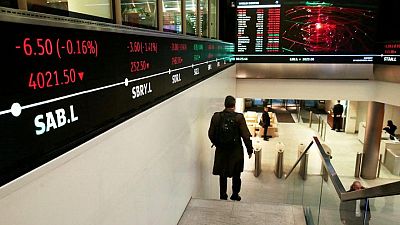 <div> <p>By Bansari Mayur Kamdar and Amal S</p> <p> -The UK’s <span class="caps">FTSE</span> 100 dropped on Wednesday after data showed consumer prices jumped to their highest in a decade ahead of a Bank of England meeting, while Cineworld fell 27% following a court order to pay $957 million in damages to a rival.</p> <p>The blue-chip <span class="caps">FTSE</span> 100 ended 0.7% lower, recording its sixth straight session in the red, weighed down by commodity-linked stocks.</p> <p>The rapid spread of the Omicron coronavirus variant has put the BoE in a double-bind, with investors no longer expecting the central bank to raise rates as early as Thursday despite higher-than-expected inflation numbers in November.</p> <p>“It seems unlikely the Bank will move on rates tomorrow as the UK looks ahead to a potentially substantial wave of Omicron cases,” Russ Mould, investment director at AJ Bell, said.</p> <p>“However, today’s data suggests Andrew Bailey and his colleagues don’t have the luxury of too much time to see how the new variant affects the economy. If they don’t act before Christmas, they have may little choice at their first meeting of 2022 at the beginning of February.”</p> <p>Investors will also be watching for the U.S. Federal Reserve’s decision at the end of its two-day meeting later in the day for clues on faster tapering of its pandemic-era bond purchases and sooner interest rate hikes. </p> <p>Britain recorded 59,610 new <span class="caps">COVID</span>-19 cases on Tuesday, the highest since early January, as it faces what Prime Minister Boris Johnson has called a “tidal wave” of infections.</p> <p>Oil majors BP and Royal Dutch Shell declined about 1.6% each, as crude prices fell on growing expectations that supply will outpace demand next year. [O/R]</p> <p>Industrial miners tumbled 2.1% as cautious investors reduced exposure to risk ahead of the Fed decision. [MET/L]</p> <p>Cineworld plunged 39.4% after a Canadian court ruling required it to pay C$1.23 billion ($957 million) to rival Cineplex as damages for scrapping a takeover deal.</p> <p>British Airways’ parent company <span class="caps">IAG</span> slipped 5.1% after it said it was set to cancel its takeover of Air Europa after European regulators indicated they would not allow the deal to go through without further concessions.</p> <p>Pest control company Rentokil Initial fell 4.7%, extending Tuesday’s losses on its $6.7 billion bid to buy U.S. rival Terminix.</p> </div>