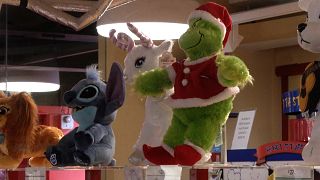 2021 is set to be another bumper year for the industry. And despite some reports that video games have killed the toy sector, it seems the traditional toy market is bouncing back. The sector rose by 5% in the first quarter of 2021. Games and puzzles were one of the highest growth categories, with a jump of 38% in Europe alone.

There’s also a new trend on the rise in the sector. So-called 'kidult' toys have surged in popularity as young adults look to their childhood toys for comfort and nostalgia during the pandemic. According to Toy World Magazine, in the past year, roughly a quarter of all toy sales have gone to young adults aged between 19 and 29.

Whether it’s the trainsets of the 1970’s or Transformers from the 80’s, increasing numbers of ‘kidults’ are rejecting digital experiences and reconnecting with physical play.

“It’s very interesting how trends are coming back,” she says. “You’ll see things in our top ten Xmas list this year that we used to have on our Xmas list when we were younger. Things like lego, barbie, pokemon: these strong brands that have continued over the years and gone from strength to strength. And I think definitely the pandemic has invoked that kind of nostalgia.”

As an example, Jo says half of Lego is now bought by adults.

Leveraging the power of digital gaming

Traditional games that bring families together are also surging in popularity this year. Mother and son Helen and Jake Downton are shopping for board games.

“I think we’ve found we have more time to play a lengthy game of Monopoly and it's like a history thing: we played it as kids,” says Helen.

“And now we have time to give it a go,” adds Jake.

Toys are for everyone, and we see consumers turning to evergreen beloved brands from their own childhood.

The rising ‘kidult’ trend is undoubtedly good news for manufacturers, like toy giant Mattel. The maker of household favourites like Barbie, and He-Man has seen a bumper year of earnings, despite supply chain challenges.

“We're all kids at heart,” says Sanjay Luthra, the Managing Director of Mattel Europe, Middle East and Africa. “Toys are for everyone, and we see consumers turning to evergreen beloved brands from their own childhood, such as Hot Wheels, Barbie, Polly Pocket, Scrabble, to enjoy a game or share their experiences with their own families. We have developed special limited editions for this demographic and taken our brand appeal even further to new platforms such as Netflix, to reboot new TV shows directed at older audiences. A great example is Master of the Universe, which was my favourite growing up too.”

And now traditional toymakers are leveraging the power of digital play too.

“We use digital gaming as part of our success,” says Sanjay. “UNO, in partnership with Ubisoft and mobile game studio Mattel163, is a joint venture with NetEase, one of the largest mobile gaming companies in the world. UNO has 190 million-plus downloads and 11 billion-plus times the game has been played. You know, that's the power of our digital strategy.”

However, supply chain disruption caused by the Covid-19 pandemic is wreaking havoc for many industries, including the toy sector. The backlog of shipments, the lack of space at ports and the shortage of truck drivers are all making companies and consumers nervous about not receiving products in time.

Don’t panic, there will be toys. But if your child, if your son, your daughter or your grandson or granddaughter wants a particular type of product, now is the time to be saying to yourself, "If I see it, I'll grab it."

Specialists say if you have a particular gift in mind, it’s a good idea to buy early.

“It has been a huge, huge challenge, not just for the toy industry,” says John Baulch, Publisher and Managing Director of Toy World Magazine.

“So inevitably, stores have been working really hard. Toy companies have been working really hard to get as much product from factories into stores as possible. Don’t panic, there will be toys. But if your child, if your son, your daughter or your grandson or granddaughter wants a particular type of product, now is the time to be saying to yourself, ‘If I see it, I'll grab it'. And then they'll be happy at Christmas.”

So traditional toys, it seems, are staging a comeback. Whether it’s for mental health benefits or just as a hobby, brands have realised that toys are not just for kids: they tap into an innate need in children and adults alike. In such a digital world, physical play is increasingly good for business.