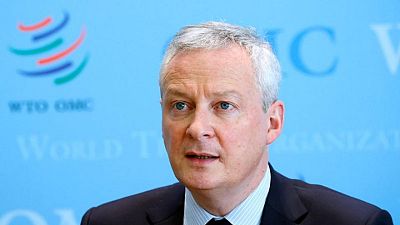 <div> <p><span class="caps">PARIS</span> – France will extend by one year stricter measures on foreign ownership of companies it deems strategically important to the country, the French finance ministry said on Monday.</p> <p>Foreign companies must receive French government permission if they want to take a stake of more than 10% in listed companies in sectors such as health, electronic communications, new technologies, aerospace, data centres, media and food safety – down from a 25% threshold before the pandemic. </p> <p>The ministry said in a statement that biotechnology companies were also privy to foreign direct investment screening.</p> <p>“We will not let any sensitive technology leave, we will not let foreign companies take control of sensitive French technology,” Finance Minister Bruno Le Maire told a news conference.</p> <p>He said that as long as the pandemic continues and the economy remains unstable, strategic companies need to be protected, and it was for this reason the application threshold of the rule had been lowered.</p> <p>“As soon as you want to take a 10% stake in a listed French company, you are subject to the foreign ownership decree if you are not a European player,” Le Maire said.</p> <p>Le Maire said the measure – which does not apply to European Union or European Economic Area companies – was extended from end-2021 to end-2022. He gave no indication what would happen after that date. </p> <p>In January, France took a tough line against an attempted takeover of retailer Carrefour by Canada’s Alimentation Couche-Tard, dealing a major blow to the near $20 billion bid approach.</p> <p>The French government had also spoken out in 2005 amid rumours that Danone might receive a takeover bid from PepsiCo Inc.</p> <p>During the <span class="caps">COVID</span>-19 pandemic, President Emmanuel Macron has ramped up calls to protect French sovereignty in areas such as health care and industry.</p> <p/> </div>