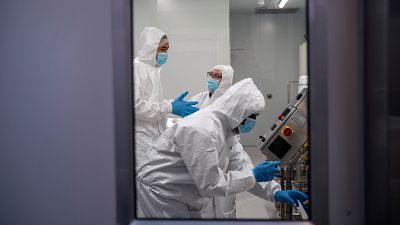 The variant, officially classified as 'B.1.1.529' by the WHO, has been described as having an "extremely high" number of mutations, according to South African scientists who first detected the Beta variant.

The strain has been linked to a growing number of coronavirus cases around the world since it was first detected in South Africa and Botswana earlier this month.

The WHO classified the new Omicron strain as a "variant of concern" on Friday.

It is as yet unclear how effective vaccines will be against it, how transmissible it is and how severe an infection it can cause.

Here's what we know so far.

What is different about Omicron?

A WHO technical brief provided to member states on Monday describes the variant as having "an unprecedented number of spike mutations".

The high number of spike mutations - believed to be between 26 and 32 - raise concerns about its ability to evade vaccines and to spread, virologist Tulio de Oliveira told an online press conference last week.

The spike protein is what helps the virus to invade the body’s cells.

"Omicron is a highly divergent variant with a high number of mutations," the WHO said, adding that some of the mutations were "concerning and may be associated with immune escape potential and higher transmissibility".

"However, there are still considerable uncertainties," the global health body said.

Where has Omicron been detected so far?

It was first detected in South Africa, with the National Institute for Communicable Diseases (NICD) announcing last week that it had confirmed 22 positive cases, with more cases being confirmed as test results come out.

On Sunday, Dutch authorities confirmed that at least 13 people who arrived in the country on flights from South Africa had tested positive for the Omicron variant.

In Portugal, 13 members of a football team tested positive for the variant on Monday, with health officials investigating whether it was one of the first reported cases of local transmission of the virus outside of southern Africa.

The Omicron variant has also been detected in travellers returning from Africa to Hong Kong, Belgium and Israel, and in European countries including Italy, Germany and the Czech Republic.

"It is not surprising that a new variant has been detected in South Africa," said Professor Adrian Puren, NICD Acting Executive Director.

"Although the data are limited, our experts are working overtime with all the established surveillance systems to understand the new variant and what the potential implications could be," he added.

Scientists believe as many as 90 per cent of new cases in the South African province of Gauteng could be Omicron, with detected cases in North West and Limpopo also increasing rapidly.

The appearance of this variant is probably the reason for the "exponential" increase in infections in recent weeks, according to Health Minister Joe Phaahla, who attended the press conference.

De Oliveira insisted that just because it was first detected in South Africa, doesn't mean that's where it originated.

Could the Omicron variant be more dangerous than the Delta variant?

The Delta variant is currently the world’s dominant COVID-19 variant.

First detected in India, it swept across the world proving to be more contagious than previously dominant variations of the virus.

It spreads so easily because its spike protein is more adept at entering human cells than previous variants.

It took around two months for Delta to be labelled 'of concern' by WHO. Omicron, on the other hand, received this classification within 72 hours of detection.

The worry about the new Omicron variant is the high number of mutations, which could help it to avoid the body’s defences.

Currently, scientists do not have enough data to discern how dangerous this variant could be, the WHO reiterated on Monday.

BioNTech, which together with Pfizer has developed the most widely used vaccine in the world, said in a statement that in "two weeks at the latest" more data from testing should be available. This data will provide more information on whether it could be an "escape variant that may require an adjustment of our vaccine if the variant spreads globally."

The company added it has previously taken action to enable it to adapt its vaccine "within six weeks and ship initial batches within 100 days in the event of an escape variant".

Professor Christina Pagel, the director of the Clinical Operational Research Unit at UCL, said on Twitter Omicron "might have significant advantages over Delta and C.1.2.," C.1.2. being another variant linked to high transmissibility.

"It's the number and type of mutations that are worrying the virologists & immunologists".

Dr Michelle Groome, an official from NICD, said that in the face of the new variants people “should get vaccinated, wear masks, practice healthy hand hygiene, maintain social distancing, and gather in well-ventilated spaces" to limit its spread.

How is the world reacting to Omicron?

The UK imposed new restrictions on travellers from South Africa and neighbouring countries Namibia, Botswana, Lesotho, Eswatini and Zimbabwe on Friday November 26. They will have to self-isolate for 10 days.

Japan followed suit on Monday, re-imposing a ban on new entrants to the country from abroad.

EU Commission President Ursula von der Leyen said flights “should be suspended until we have a clear understanding about the danger posed by this new variant, and travellers returning from this region should respect strict quarantine rules.”

She insisted on extreme caution, warning that "mutations could lead to the emergence and spread of even more concerning variants of the virus that could spread worldwide within a few months".

The WHO's head of emergencies Dr Michael Ryan warned against "knee-jerk responses", stating: "We’ve seen in the past, the minute there’s any kind of mention of any kind of variation and everyone is closing borders and restricting travel. It’s really important that we remain open and stay focused".