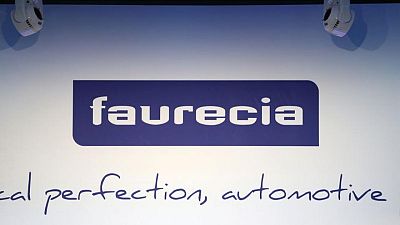 <div> <p> (Removes references to expectations on 2022 quarterly and half-year performance after paragraph 12 because they were not for the group as a whole, as suggested, but for a specific U.S. business unit)</p> <p><span class="caps">PARIS</span> -French auto supplier Faurecia cut its full-year guidance for a second time on Monday, citing a drop in European car production, the impact of supply bottlenecks and <span class="caps">COVID</span> restrictions on operations and one-off costs in the United States. </p> <p>Shares in Faurecia were down 6.6% at 0907 <span class="caps">GMT</span> after the outlook revision. </p> <p>The downgrade was made after research institute <span class="caps">IHS</span> Markit, on which Faurecia bases its own sales projection, said this month that worldwide car demand in the second half of 2021 would shrink by 13% to 6.8 million produced vehicles, down its previous forecast of 7.8 million vehicles. </p> <p>Faurecia also took into account an increased risk of <span class="caps">COVID</span>-19-related production declines as Europe faces a new wave of infections and a new variant of the virus was detected. </p> <p>“We had a positive trend in November,” Chief Financial Officer Michel Favre said in a conference call shortly after the statement, “but on the other hand (…) we have no clue that we won’t have some early closures in the first week of December.”</p> <p>Favre said that new <span class="caps">COVID</span>-19-related risks added to an already strained situation due to component inflation, mainly affecting semiconductors and continued operating problems at a plant in Michigan, the United States, which had forced the company to slow down production currently to 80% of capacity. </p> <p>The company now forecast 2021 sales of between 15 billion-15.5 billion euros ($16.92 billion to $17.49 billion) and an operating profit margin of 5.5%, compared to a previous target of sales at 15.5 billion euros and a 6-6.2% margin.</p> <p>The downgrade to its sales forecast would also heavily affect the company’s net cash flow target, which Faurecia now forecast at “more than 300 million euros”, down from a previously communicated 500 million euros target.</p> <p>Faurecia’s revised outlook also hit other French auto shares, with Renault, down 0.9%, and Michelin, 0.7% lower, the biggest losers on the CAC40, which was up 1%.</p> <p>Faurecia’s announcement came after the French group earlier this year agreed to acquire a majority stake in German automotive lighting group Hella in a 6.7 billion euro deal.</p> <p>The company on Monday said the Hella acquisition should be completed by the end of February when Faurecia plans to release its 2022 financial outlook, and <span class="caps">CFO</span> Favre said the latest profit warning had no impact on the integration of the new unit. </p> <p>Asked on next year’s perspective, Favre said that he was optimistic about the market’s procurement difficulties as there were signs that semiconductors will be stocked up again and carmakers will become more efficient in using them. </p> <p>The <span class="caps">CFO</span> acknowledged that the company’s first cut to its 2021 guidance in September was perhaps not conservative enough and pledged that the new guidance was “as conservative as possible.”</p> <p>Faurecia in its statement said guidance was made on the assumption that no new major lockdown, impacting production or retail sales in any world region, would be put in place. </p> <p>($1 = 0.8864 euros)</p> </div>