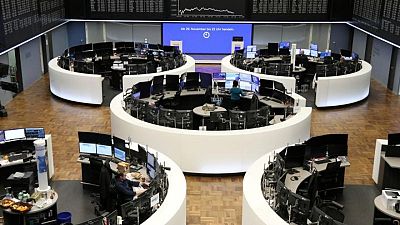 <div> <p>By Anisha Sircar and Susan Mathew</p> <p> – European shares rose on Monday after their worst selloff in more than a year as investors awaited clues on whether the Omicron variant of coronavirus would hamper economic recoveries and monetary tightening plans by central banks.</p> <p>The pan-European <span class="caps">STOXX</span> 600 ended up 0.7%, logging its best day in a month and recovering some of Friday’s 3.7% slump triggered by concerns around the newly discovered variant. </p> <p>While the variant was spotted in several countries across the globe, a South African doctor, who was one of the first to suspect a different strain, said that symptoms were so far mild and could be treated at home.</p> <p>Travel and leisure stocks rose, with Wizz Air, Lufthansa, <span class="caps">TUI</span> Group and Ryanair and Carnival all rising between 1% and 5.5% after double-digit falls on Friday on fears of renewed travel restrictions.</p> <p>Financial stocks added 1.7%, while energy and basic material stocks were also among the biggest boosts as prices of the underlying commodities rose. </p> <p>London’s <span class="caps">FTSE</span> 100 jumped 0.9% with investors also betting the Bank of England may be forced to rethink monetary policy tightening next month.</p> <p>“The emergence of the Omicron variant has now crystalised fears that we’re not out of the woods just yet… and led to a shift in monetary policy expectations,” said Laith Khalaf, head of investment analysis at AJ Bell.</p> <p>“The fact that markets have now alighted on February as the likely month for a UK interest rate rise shows there is still considerable optimism that Omicron is a stumbling block, rather than a brick wall.” </p> <p>Meanwhile, the European Central Bank argued that the euro zone’s economy had learned to cope with successive waves of the pandemic.</p> <p>But increasing pressure on the central bank, German consumer price inflation rose further in November to hit another record high, data showed on Monday. The German <span class="caps">DAX</span> gained the least among regional peers, up 0.2% </p> <p>BT Group jumped 6.1% after a report that Indian oil-to-telecom conglomerate Reliance was considering an offer for the UK telecom firm. Reliance denied the report, capping the stock’s gains.</p> <p>Faurecia dropped 7.9% drop after the car parts group trimmed its full-year guidance, citing a drop in European automotive production.</p> <p>Despite clocking several record highs in November, the <span class="caps">STOXX</span> 600 is on course to post monthly losses of about 1.7% as a strong earnings season and diminishing fears around tighter monetary policy were outweighed by concerns around the new variant and fresh restrictions in Europe. </p> <p/> </div>