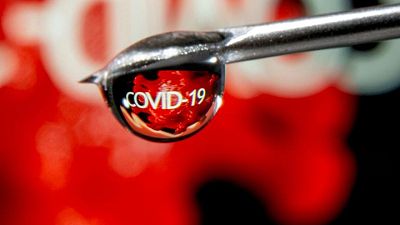 <div> <p>By Abhinav Ramnarayan and Dhara Ranasinghe</p> <p><span class="caps">LONDON</span> -Euro zone government bond yields dropped sharply across the board on Friday as investors reacted to a newly identified coronavirus variant spreading in South Africa by piling into safe haven assets.</p> <p>The variant was considered by scientists to be the most significant yet found, Britain said on Friday, adding that authorities needed to ascertain whether or not it rendered vaccines ineffective.</p> <p>“It’s a classical risk-off move into safe havens such as government bonds, with equities and other risky assets under pressure,” said Commerzbank rates strategist Rainer Guntermann. </p> <p>“It is still early days, but going into year-end, investors may prefer to keep a bit more in safe havens and we also have to assess how it feeds into central bank risk assessments even if this variant turns out not to be of huge concern,” he said. </p> <p>“It’s a reminder that the pandemic could pop up again at virtually any time.” </p> <p>Safe havens, such as government bonds, the Japanese yen, the Swiss franc and gold were in demand, while Asian and European equity markets recorded losses. </p> <p>Germany’s 10-year government bond yield, the benchmark for the bloc, was down 9 bps at -0.33% at 1530 <span class="caps">GMT</span>. Other highly rated euro zone government bond yields were lower by around 8 bps. </p> <p>Italy’s 10-year government bond yield dipped below the 1% mark and was at 0.97%, down 9 bps on the day. </p> <p>U.S. Treasury yields slipped around 7-10 bps across the curve. </p> <p>Meanwhile, rate-hike expectations in the single currency bloc fell, with money-market investors pricing in a roughly 50% chance of a 10 basis point rate hike from the European Central Bank in December 2022, having fully priced in such a move earlier this week. </p> <p><span class="caps">ECB</span> policymakers Ignazio Visco and Luis de Guindos said on Friday the euro zone economy was still rebounding but the pandemic was once again a source of worry.</p> <p>The central bank is still on course to end its Pandemic Emergency Purchase Programme in March, <span class="caps">ECB</span> vice-president de Guindos said.</p> <p><span class="caps">ECB</span> President Christine Lagarde was quoted as saying to a German daily that the central bank expected inflation to fall from January.</p> </div>