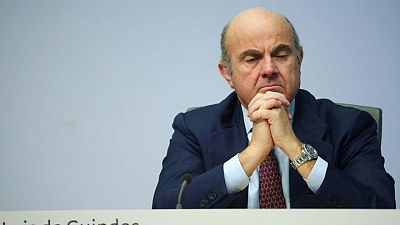 <div> <p>By Belén Carreño</p> <p>S’<span class="caps">AGARO</span>, Spain -The European Central Bank still plans to end its emergency bond purchases in March despite threats from a new variant of the coronavirus and rising infections, the <span class="caps">ECB</span>’s top two officials said on Friday.</p> <p>Global authorities and investors reacted with alarm on Friday to a new coronavirus variant detected in South Africa, with the European Union and Britain among those tightening border controls as researchers sought to find out if the mutation was vaccine-resistant.</p> <p>But <span class="caps">ECB</span> President Christine Lagarde and Vice-President Luis de Guindos both reaffirmed their expectations that the <span class="caps">ECB</span>’s Pandemic Emergency Purchase Programme (<span class="caps">PEPP</span>) would end in March, with a decision expected next month.</p> <p>“<span class="caps">PEPP</span> will end as planned with a size of 1.85 trillion euros ($2.1 trillion) at the end of March,” de Guindos told an event in Spain. “We will discuss the alternatives in December.”</p> <p>Lagarde also said in an interview with the Frankfurter Allgemeine Zeitung published on Friday that she expected to stop adding to <span class="caps">PEPP</span>’s bond stash in early 2022.</p> <p>But Spanish central bank governor Pablo Hernandez de Cos, an influential policy dove on the <span class="caps">ECB</span>’s Governing Council, was more cautious.</p> <p>“Today, new information has emerged, which must be taken into account, and the policymaker cannot ignore this information,” he told the Spanish event. </p> <p>Speaking earlier at an event in Milan, Bank of Italy governor Ignazio Visco also said the recent increase in the number of infections pushed back “the post-<span class="caps">COVID</span> perspective”. </p> <p>“Uncertainty remains high, mainly reflecting a health situation that has once again become a source of considerable concern,” Visco, also a policy dove, added.</p> <p>Stock markets fell sharply and investors pushed back https://www.reuters.com/markets/europe/new-covid-scare-sparks-rate-rethink-markets-2021-11-26 interest rate hike bets on Friday amid concerns the new variant may be able to evade immune responses and could be more transmissible. [MKTS/GLOB] </p> <p>The <span class="caps">ECB</span> has guided for no rate hike next year and some policymakers have called for continued support for the bond market even after <span class="caps">PEPP</span> ends.</p> <p>De Cos also said the <span class="caps">ECB</span> had other tools to support inflation in the euro zone, such as its regular bond-buying scheme.</p> <p>“Once the pandemic programme ends, let us suppose in March, the rest of the monetary policy tools – our regular programme, the long-term financing operation and interest rates – are at our disposal to achieve a 2% inflation in a sustainable way,” de Cos said at the Spanish event.</p> <p>Inflation in the euro zone hit 4.1% last month but the <span class="caps">ECB</span> expects it to fall below its 2% goal in 2023.</p> <p>De Guindos noted the persistent challenges, including supply bottlenecks, but said Europe’s high vaccination rate made the outlook more favourable than earlier in the pandemic.</p> <p>“We’ve got a differentiating factor, which is vaccination,” de Guindos said. “Therefore I think the effect on the economy is going to be more limited, I’m relatively optimistic.”</p> <p>He added the economy had shown an ability to adjust to the pandemic and predicted the euro zone economy would grow by around 5% this year and strongly next year too.</p> <p>($1 = 0.8839 euros)</p> </div>