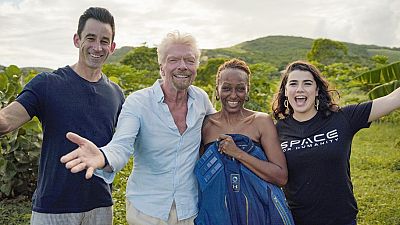 Having entered a raffle and not expecting to hear anything more about it, a 44-year-old woman from Antigua and Barbuda and her daughter were shocked to discover they had won an out of this world prize.

The news was broken to her by the company’s founder Richard Branson himself, who visited her home in early November to present her with her astronaut suit.

Schahaff will become the first person from the Caribbean islands to visit space, a feat that only about 600 humans have ever experienced.

She decided to take her 17-year-old daughter, a science student currently living in the UK who dreams of working for NASA, with her on the trip.

From cinema tickets to a ticket to space

"I just thought I'd do an interview on Zoom," Schahaff told AFP. "When I saw Richard Branson walk in, I started screaming! I couldn't believe it".

Schahaff won the prize by participating in a fundraiser lottery organised by Virgin Galactic on the Omaze platform, which raised $1.7 million (€1.5 million). The money will be donated to the NGO Space for Humanity, which works for greater access to space.

The amount of Schahaff's donation was not revealed but donations started at just $10 (€8,91). The drive attracted nearly 165,000 participants in eight weeks, Virgin Galactic said in a statement.

"I was always fascinated by space as a child," she said, adding that she was "always the first one to buy her tickets" to see the latest Star Wars or Star Trek movie.

"It's so fascinating, it's kind of liberating," said the health coach.

She ended up entering the draw after seeing an advert on a Virgin Atlantic plane.

"I just filled out the form and did what was asked, not realising I might actually get an answer," she recalls.

"It's a great opportunity for me to feel alive," said the woman who still lives in Antigua, where she grew up, and who hopes to "inspire others to live their dream too".

Making space tourism accessible for all

The planned trip on board a Virgin Galactic spaceplane will offer only a few minutes in zero gravity.

A huge carrier plane takes off from a conventional runway, then drops the ship, which looks like a large private jet, at a high altitude.

It then fires up its engine until it reaches an altitude of over 80 km - the boundary of space according to the US military - before then gliding back down to Earth.

The flights will take place from the Spaceport America base in the New Mexico desert, which the lucky winner will be able to visit with Branson.

Schahaff will be one of Virgin Galactic's "first astronauts" but her place in the queue has not yet been determined, according to a company spokeswoman.

The goal is to sell a total of 1,000 before the launch of commercial flights, the first of which is scheduled for the fourth quarter of 2022, after a period of aircraft upgrades currently underway.

"To be able to give people of all ages and backgrounds equal access to space, and in return, the opportunity to inspire and guide others once on Earth, is what Virgin Galactic has been striving for over the past two decades," said Britain's Richard Branson, quoted in the statement.

On July 11, the billionaire himself boarded SpaceShipTwo during a test flight, accompanied by Virgin Galactic employees.

The space race is raging between Branson and billionaire Jeff Bezos' company, Blue Origin, which also offers suborbital flights offering a similar experience but onboard a rocket taking off more conventionally in the vertical.