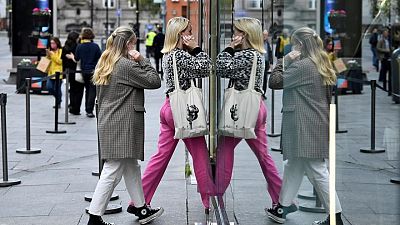 <div> <p><span class="caps">DUBLIN</span> – Irish consumer sentiment weakened slightly in November, with respondents reporting a range of worries from higher energy bills and problems in Ireland’s housing market to a surge in <span class="caps">COVID</span>-19 cases, a survey found on Tuesday.</p> <p>The <span class="caps">KBC</span> Bank Ireland consumer sentiment index declined to 83.1 in November from 86.8 in October. The monthly drop was the largest since January and brings the sentiment index to its lowest level since April.</p> <p>A special question added to the survey for November found that only one in eight consumers plans to spend more this Christmas than last, while one in three expects to spend less.</p> <p><span class="caps">KBC</span> Ireland chief economist Austin Hughes said the weakest elements in the November survey related to the outlook for the economy and jobs, areas that were strongest in October when a range of upbeat forecasts reduced concerns about changes to the global tax framework.</p> <p>He said headlines in November were “notably gloomier,” with “a significant focus on the scale of problems in Ireland’s housing market as well as broader concerns about sharply rising living costs”. </p> <p>Speculation about the reimposition of health-related restrictions was also more widespread during the November survey period. </p> <p>Hughes said the November reading does not point to a markedly poorer outlook but suggests that consumers fear improvements in their household finances might fall short of expectations. </p> <p/> </div>