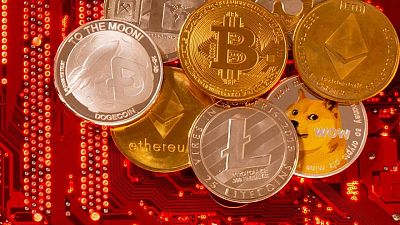 <div> <p><span class="caps">MUMBAI</span> -India is looking to bar most private cryptocurrencies when it introduces a new bill to regulate virtual currencies in the winter session of Parliament, the government said late on Tuesday.</p> <p>The government will allow only certain cryptocurrencies to promote the underlying technology and its uses, according to a legislative agenda for the winter session that is set to start later this month. </p> <p>Through the Cryptocurrency and Regulation of Official Digital Currency Bill, 2021, India is also looking to make a framework for the official digital currency that will be issued by the Reserve Bank of India. </p> <p>The central bank has voiced “serious concerns” about private cryptocurrencies and is set to launch its own digital currency by December.</p> <p>Bitcoin, the world’s biggest cryptocurrency, is hovering around $60,000, and its price has more than doubled since the start of this year, attracting hordes of local investors.</p> <p>No official data is available but industry estimates suggest there are 15 million to 20 million crypto investors in India, with total crypto holdings of around 400 billion rupees ($5.39 billion).</p> <p>Earlier this year, India’s government considered criminalising the possession, issuance, mining, trading and transference of crypto assets, but a bill was not introduced.</p> <p>Since then, the government has changed its stance slightly and is now looking to discourage trading in cryptocurrencies by imposing hefty capital gains and other taxes, two sources told Reuters this month.</p> <p>But a senior government official told Reuters that the plan is to ban private crypto assets ultimately while paving the way for a new Central Bank Digital Currency (<span class="caps">CBDC</span>)</p> <p>Prime Minister Narendra Modi chaired a meeting to discuss the future of cryptocurrencies amid concerns that unregulated crypto markets could become avenues for money laundering and terror financing, sources told Reuters separately.</p> </div>