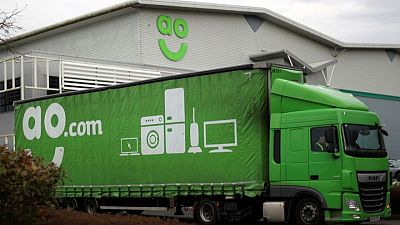 <div> <p> – Britain’s largest online electricals retailer AO World warned on Tuesday that supply chain issues, product shortages and rising costs were hammering its all-important peak trading period, prompting it to slash its profit outlook.</p> <p>The company’s shares, which have lost nearly 70% of their value since the start of the 2021, fell 27% on Tuesday after its second profit warning in two months. </p> <p>Trading during the holiday season was significantly weaker than anticipated only eight weeks ago, the company said, with poor availability in certain categories, particularly new products.</p> <p>Retailers globally have been struggling with shortages and delays as economies opened up to stagnant supply chains and tightening labour markets. Britain is also adjusting to having fewer workers from the European Union.</p> <p>“Our results over this period have inevitably been affected by the constraints and uncertainty seen across our industry,” AO World founder and Chief Executive John Roberts said, while adding the company has cemented the progress of last year when profits tripled.</p> <p>AO World, which sells laptops, washing machines, mobile phones and printers, saw profits soar during the pandemic as most people worked from home, but in October warned that profit would fall as a lorry driver shortage disrupted supply chains.</p> <p>The company, which has recruited about 500 new drivers, said full-year sales are now expected to be flat to 5% lower. </p> <p>It cut its annual adjusted core profit outlook to a 10 million-20 million pound ($13.4 million-$26.8 million) range for the 12 months ending March 31 next year, from 35 million-50 million pounds earlier. </p> <p>It had reported profit of 64 million pounds for fiscal 2021, and an operating loss of 11 million pounds for the six months ending Sept. 30, compared with a profit of 16 million pounds a year before. </p> <p>Earlier this month larger rival Currys said it was well stocked for Black Friday and Christmas period despite supply chain disruption.</p> <p>($1 = 0.7472 pounds)</p> <p/> <p>(This story has been refiled to amend day of the week in paragraph 1)</p> <p/> </div>