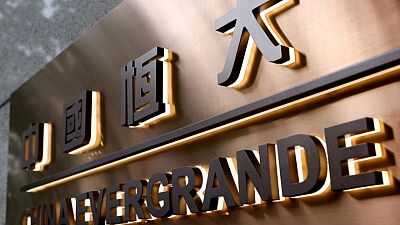 <div> <p><span class="caps">LONDON</span> – Chinese property firms saw their battered bonds cement a strong weekly bounce on Friday, although there was one notable absentee from the rally: China Evergrande Group.</p> <p>A flurry of asset sales and share placings, including some from Evergrande itself, has sparked hopes this week that the heavily-indebted sector will be able to avoid a full-blown crisis and finally stabilise. </p> <p>Friday’s gainers included China’s top property developer Country Garden, whose bonds were nearly back to par, or 100 cents on the dollar, having tumbled to around 80 cents last week in a sector-wide slide. </p> <p>Shimao was also a notable rebounder. Its bonds completed a yo-yo back up to 90 cents having plunged to around 70 last week in a breakneck fall capped when S&P Global stripped it of its prized investment grade credit rating.</p> <p>Market watchers put the rebound down to relief that firms have been able to raise money via share placing and asset sales this week, even if they have had to offer deep discounts to get the deals done. </p> <p>Country Garden Services Holdings, the property services unit of China’s top developer, raised $1 billion on Thursday from share placings, two sources told Reuters.</p> <p>Sunac China, among the top four developers in the country, raised a total of $949.70 million, while Evergrande also struck a deal to sell its entire stake in streaming services firm HengTen for HK$2.13 billion ($273.5 million).</p> <p>Despite the gains elsewhere, though, Evergrande’s bonds have remained rooted at between 23 and 29 cents on the dollar this week – a 71%-77% mark down from their value back in May when the Chinese property sector’s troubles first began to snowball.</p> <p>S&P cautioned this week that Evergande, the world’s most indebted developer with around $19 billion of international market bonds and $300 billion of liabilities altogether, was still “highly likely” to default as it has $3.5 billion to repay in March and April next year alone.</p> <p/> <p>(This story corrects spelling error in first paragraph)</p> <p/> </div>