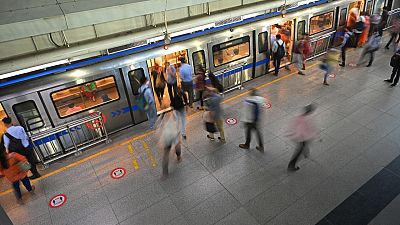 The labyrinthine network has a total operational length of 327 km, with 236 stations en route.

According to The Indian Times, the DMRC became the world’s first railway network to earn carbon credits from the United Nations back in 2011 for helping cut Greenhouse gas emissions by almost 6,30,000 tonnes a year.

In India, railway stations and airports are already powered by solar panels. For Anuj Daval, Delhi’s metro chief, the renewable energy source is there to be exploited to its full potential.

"You can see the huge rooftop area that we have got," he said, pointing at the solar farm next to New Delhi’s main metro station. "There is a lot of sun available, so why not take it?"

When New Delhi’s metro is expanded, all future stations will have solar panels on the roof.

"Till now, the solar power generated by the rooftop solar plants installed in DMRC premises were utilised for the auxiliary requirements such as lighting & air conditioning of stations, depots etc," a DMRC statement read.

Every day, 6 million trips are made from New Delhi's metro stations, according to the DMRC.

Inside the metro, all electrical equipment and devices are powered by up to 60 percent solar energy. The new challenge is to be fully green by the end of the year.

Is India becoming a leader in solar energy?

With a rapidly growing economy, India’s need for clean energy is growing at a fast pace.

India in particular has taken on a leading role in the world for solar energy use.

Through the International Solar Alliance, a coalition of solar-resource-rich countries, India is pushing ahead with 101 other countries, including the US and Sweden, to address their energy needs through solar renewables.

Solar energy is already cheaper than coal in India and the government is making it easier for companies to invest, according to the Indian national press agency IANS.

According to International Energy Agency’s Renewables 2020 report, the country has the world’s fifth-largest installed solar power capacity, with 38 gigawatts (GW) in 2019, and production of 54 TWh of electricity.

The 750 MegaWatt (MW) Rewa Ultra Mega Solar Park has contributed to India’s ambitious target of installing 100 GW of solar power capacity by 2022, with support from the World Bank Group and the Clean Technology Fund.

"Now we are having the COP summit going on, so everywhere here in India, there are measures to reduce the carbon footprint," Daval explained.

As the COP26 meeting ended on November 12, India courted controversy with a last-minute amendment in the final agreement, replacing coal "phase out" with "phase down".