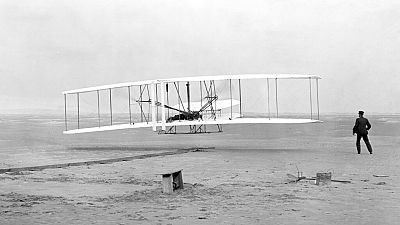 Just picture it: the Wright brothers celebrating their first flight, the manual turn of the propeller, or a flapping scarf in the wind as an open-top plane takes off.

These are all powerful images but how did we get from this version of aviation to where we are now?

Popularised air travel has been a key development of the 20th century, and now in the 21st century, it shows no sign of slowing down.

But the journey from freezing open-air travel to the comfortable first-class lounge has been a long haul, so stay in your seats as we explore some of the technological advancements that have got us to our destination.

“A major change that started in the 1950s and continues to this day is the introduction and development of the turbofan engine,” Dr Ken Hart, visiting fellow in aerospace engineering at the University of Hertfordshire said.

The jet age began in the 1950s and while the basic operating principles of the jet engine remain the same as the original in 1937, there have been massive changes in its design and performance.

Engines are now able to achieve higher pressure ratios and gas temperatures due to the introduction of aerodynamic fans and turbine blades supported by advanced computational fluid dynamic analysis tools.

Temperature resistant materials have also helped in creating high power engines, along with complex air-cooling systems for parts of the engine which are hotter than the melting point of some metals.

Only one big change in materials, but it was significant

Whether an aircraft can take off involves a trade-off between the payload - the passengers and fuel - and the weight of the aircraft itself.

“The weight of an aircraft is crucial to how well it flies, or even flies at all, since its wings must generate sufficient aerodynamic lift to combat this weight,” Dr Hart said.

“The airframe weight should be kept as light as possible so that the aircraft can carry more people or cargo … and/or fly longer distance routes needing more fuel”.

Balancing the need for profit through increased passenger numbers, against the need for strong materials, means manufacturers are always on the lookout for lighter alternatives that will increase their payload.

“There’s only really been one huge change because aircraft over 60-years have been made of aluminium primarily,” Dr Peter Barrington, Head of the Department of Aerospace and Aircraft Engineering at Kingston University in London, said.

“Now there’s a move to composite materials and that does give some advantages in terms of making the aircraft lighter,” he added.

Composite materials, made from carbon fibres, were introduced to military aircraft in the 1960s and have been steadily introduced to civil aviation since then.

This has led to significantly lighter aircraft due to a better strength to weight ratio in carbon fibres, meaning more profit for airlines and cheaper airfares.

Wings: the challenge is designing something that works at high speeds

The plane wing has changed over time, but it is the airfoil - the part of the wing that makes air travel faster above the wing than below - that has proved integral to changing designs.

The issue with airfoils is designing ones that won’t provide too much resistance at high speeds.

“There’s been lots of work on developing modern airfoils that are more efficient, the airfoils they had a lot of years ago were quite efficient at low speeds but one of the big challenges is designing low drag airfoils as you approach the speed of sound,” Dr Barrington said.

The lift provided by aerofoils provides for both low-altitude takeoff and landing and high-altitude cruising. Most modern aircraft travel at 80 per cent of the speed of sound.

Over time the use of slats and flaps has allowed for more low-speed lift during takeoff, and once they are stowed under the clean wing then it creates the perfect lift to drag ratio. This means the aircraft can move more smoothly and use less fuel.

Fuel efficiency and fuels of the future

For years, the aviation industry has been focused on improving fuel efficiency, with the hope of keeping down costs. These days however it’s more focused on sustainability.

“There’s a big effort to reduce the environmental impact”.

Since 1970, fuel burn efficiency in commercial aircraft has improved by 41 per cent. However, it isn’t all good news.

“The predicted increase in future demand for air travel could lead to an increase of 19 per cent in the aviation contribution to global CO2 emissions by 2050, even with an assumed acceleration of improvements in aircraft efficiency,” Dr Hart said.

With this in mind, alternatives will need to be sought; hydrogen, sustainable aviation fuel made from biomass, and batteries are all being explored. But all have their faults.

Hydrogen needs to be kept very cold if it’s in liquid form and the batteries required for a plane would be very heavy. Sustainable aviation fuel seems the most likely as existing equipment could still be used.

However, maybe all planes will be seen off in the future by radical ideas like Elon Musk’s hyperloop. Dr Barrington doesn’t think so.

“Over land those would be quite competitive but one of the advantages of aircraft is they can get over water quite easily, whereas that’s not so easy in a hyperloop”.