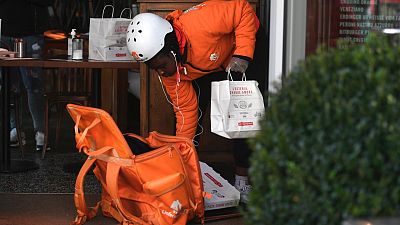 Germany's delivery riders should be provided the basic tools for their job, a court ruled this week   -   Copyright  Ina FASSBENDER / AFP
By Tom Bateman  •  Updated: 15/11/2021

Food delivery services in Germany must either give their couriers bicycles and mobile phones to use for work or pay them compensation, the country's Federal Labour Court ruled on Thursday.

The decision came after Frankfurt-based bike courier Philipp Schurk took the delivery platform Lieferando to court to demand that it provide him with the essential tools for the job.

Lieferando - the German subsidiary of Amsterdam-based Just Eat Takeaway - argued that as bike couriers working on its platform already had bicycles and smartphones, they were not "significantly burdened" by having to use their own equipment.

The court disagreed, saying the practice "unreasonably disadvantages" Lieferando's riders who shouldered the risk for damage to their work equipment.

Lieferando had also said it offered couriers a €0.25 bicycle repair voucher per hour worked. However, the vouchers had to be used at a repair shop of the company's choosing. It did not provide any similar support for couriers' phones.

"This contradicts the basic legal idea of the employment relationship, according to which the employer must provide the work equipment essential for the performance of the agreed activity and ensure that it is in good working order," the court ruled.

Schurk told German national broadcaster ZDF he was "overjoyed" after the federal court ruled in his favour.

"This is a strong and groundbreaking signal to establish fair and equal working conditions in the industry," said Freddy Adjan, vice chairman of Germany's Food and Catering Union NGG, which backed Schurk and fellow rider Alexander Menier.

As a result of the Federal Labour Court's decision, food delivery riders in Germany are now legally entitled to receive a bicycle and phone capable of receiving orders from their employer.

However, the ruling still allows an exception where riders' contracts can require them to provide their own equipment in return for "appropriate financial compensation".

The court did not set out what that compensation would entail.