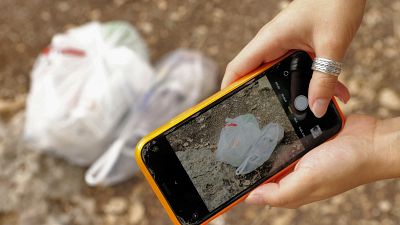 The Israeli government has launched an app to encourage citizens to be more environmentally friendly, rewarding them with coins as they pick up litter.

Israel is among the world’s top producers of rubbish per capita, according to AFP.

For every bag of refuse filled, the new app allows users to earn 10 virtual coins that can be exchanged for goods and products from partner companies.

The app, called Clean Coin, lets the user snap a picture of the detritus in order to tag the location which in turn gets registered in an interactive map.

"By viewing the photos, I can really see the amount of trash, where exactly the trash is located, how many bags are approximately needed in order to collect it, and the amount of credit," Adam Ran, co-founder and CEO of Clean Coins, explained.

When cleaning up becomes a game

The Clean Coin platform was designed as a treasure hunt, with different levels and meeting points, Gal Lahat, its co-founder and technical director, told AFP.

He designed the app to be playful, he said, with users earning points and unlocking different levels.

"You can see your progress compared to other users, but also when you search for the trash in the field, we want it to look like a game," Lahat said.

“The reward encourages everyone to do something for the environment," he added.

“Nature benefits from it, and I also get a small personal benefit for myself that gives me motivation,” Elishya Ben Meir, a user of the app who now combines dog-walking and clean-walking, said.

The 18-year-old girl said she exchanged her collected Clean Coins for a T-shirt at a Haifa branch of the surf shop Billabong.

“We want to bring a reward that on the one hand is physical - like a gift - but on the other hand is also social and altruistic, when you feel good and you can show people you did good,” Lahat pointed out.

“We do want to bring these two kinds of rewards together, and we do believe that someone who does good should be rewarded for it".

Is Clean Coins the solution to fight pollution?

Clean Coin is not a cryptocurrency involving energy-intensive "mining" of coins that requires massive computer power.

Instead, it is a kind of voucher to reward rubbish collection. More than 25 brands have joined the network, Ran said, allowing users to redeem coins for clothes, indoor climbing and hotel stays, among other options.

For Gal Lahat, this app could be a real solution to fight pollution in Israel.

"The solutions I believe in are solutions that happen on a daily basis,” he explained.

“It's not like bringing people together for a very large one-time clean up operation - which is excellent - but if there is a solution that enables people to reach nature on a daily basis and clean it, this would probably be the real solution. And I think this thing talks (to people), the game-like element, the rewarding element, or the good-deed element".

In all, Israel produces around one million tons of plastic waste per year, which represents about 18 per cent of the total waste in the country, he said.

In comparison, the rate in European countries is around 12 per cent.