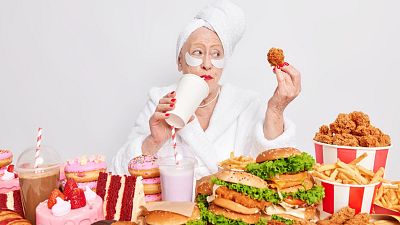 Today consumers are flooded with choice thanks to powerful marketing and advertising industries.   -   Copyright  Canva
The opinions expressed in this article are those of the author and do not represent in any way the editorial position of Euronews.
By A personal reflection by Ian Bates  •  Updated: 11/11/2021

Like winter, it’s been coming. We caused it and we know how to stop it. We just haven’t...yet. Let’s hope COP26 finds an unexpected breakthrough in global solidarity.

I heard Paddy Loughman from the United Nations Framework Convention on Climate Change sum up our situation in the phrase “climate change is the new context for everything”. And he’s right.

It’s easy to apportion blame, a lot easier than pointing the finger at yourself. So I decided to start there and ask myself the question - am I the problem?

I work in an industry predicated on creating demand in an economic model that’s led to an oversupply in pretty much every category (until recently) and choice paralysis for those who have a choice.

Of course, trade is an honourable endeavour, as old as history itself. And marketing by extension isn’t evil – showing goods and services off in their best light to the people most likely to buy them.

But the marketing cog is integrated into a demand creating machine that was perhaps unconsciously destructive and is now more clearly unsustainable in its current form.

The industrialisation of demand creation over time has fed a dissatisfaction and insecurity with what we have, where we go, who we’re with and fundamentally, who we are.

In our industry, people are even referred to as consumers as if that’s the ultimate measure of our existence. But I’m complicit because one key part of my job is to create demand.

Weirdly it even appears to make us ill and unpopular. Industry publication, The Drum reported that 92 per cent of people in agencies have suffered with mental health issues, compared to 62 per cent of the wider population.

The climate change tsunami is still coming. It’s time for the industry to think about its role because the reality is we are part of the problem. Can I make a difference and become part of the solution?

At the same time, we’re destroying trust with the very people we’re selling to, with advertising execs ranked lowest in the 2020 Ipsos Mori Veracity Index and data and insights company, Kantar reported that 'consumers (that word!) are suffering from ad fatigue, with bombardment and over saturation putting the UK ad industry at risk’. Up to one billion people are using ad blockers.

In a recent article, broadcaster Adrian Chiles makes a heartfelt and witty case for people to stop buying stuff saying “this madness must stop, but I don’t see our lunatic addiction to stuff addressed in the plans to get to net zero”. He goes on to suggest an ad campaign for ‘Stop Buying Stuff’ that kills the industry.

The signs are there but we seem destined to keep the machine turning until the wheels fall off the planet.

Creating purpose as a business strategy

I don't think I have much of an excuse, at least not one that’s sustainable. Marketers talk about value creation and building valuable brands and businesses. I love doing that, but in reality, what value am I creating, and for who and at what cost? For too long the only value that’s mattered is profit.

So my questioning continued. What world do we want to live in? What do we really value? And why don’t we promote that? We could create so much more value if we valued more than profit.

Interestingly, 'Shared Value' as a business strategy is on the road to offering robust commercial measurement, although it’s not a movement without controversy.

Which led me to purpose – getting to the heart of why a business and brand exists. The fundamental brand purpose that resonates in the lives of real people (not caricatures) and inspires employees to unite their purpose to it.

It’s vital for leadership teams to be able to articulate their purpose to align their people and culture and release innovation and creativity.

Purpose has been poorly interpreted in the industry to date, often seen as a ‘virtue signalling’ advertising technique rather than a business strategy.

My role in a new economic ecosystem

Governments can lead by creating the conditions for change through policy and legislation, caring for the community as a whole. I can help create that demand.

Businesses can share in this effort by aligning their people and behaviour to their purpose, mission and vision, releasing vast reserves of untapped human capital. I can help create that demand.

And I can choose how I do business and who I do it with, something now enshrined in our own purpose “to help socially responsible organisations cross the chasm between early adoption and scale so they can make a positive impact in the world”.

Maybe we can change the machine from the inside. Each cog among thousands of others. Covid has been a wakeup call.

The initial response was a sense of urgency and unity of purpose – for the first time in a long time. Suddenly we started to value things that had been marginalised, including whole professions like care workers for example.

But the climate change tsunami is still coming. It’s time for the industry to think about its role because the reality is we are part of the problem. Can I make a difference and become part of the solution?

We just might need to demand more – of our governments, our businesses and ourselves.