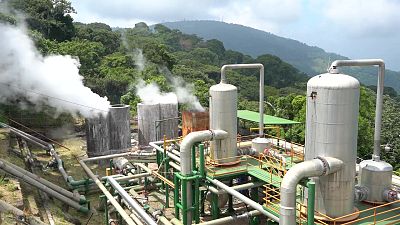 Despite being a small country, El Salvador is home to 30 volcanoes, among which 20 are thought to be potentially active.

Geothermal energy generated by these volcanoes is a rich source, which is now being harnessed to mine Bitcoin in a new pilot project in the Central American country.

Bitcoin has been an official currency El Salvador since September with mixed reaction from its citizens.

How can you mine Bitcoin using volcanoes?

The city of Berlin, 112 km south of the capital city San Salvador, has a geothermal plant that was built in 1999. The plant is composed of 16 2,000 to 3,000 deep shafts from which steam circulates and makes three turbines function.

The energy generated by those turbines can reach up to 107 megawatts, but only five are used for the operation and mining of Bitcoin. The rest of the energy is used for the country’s grid.

Thanks to this energy source, about 300 computers can work day and night. Bitcoins are created using computers that solve complex mathematical problems and require a large amount of electricity to operate.

"We have a container where there are a series of processors that are currently working," said Gustavo Cuellar, technical manager of the Rio Lempa Hydroelectric Executive Commission (CEL), the state-owned company on which the plant depends.

BigBlock Datacenter is a French bitcoin mining company that advised Salvador on the project.

"Mining is a crutch for renewable energy... a real boon" to use surplus electricity, the entrepreneur told AFP. He also pointed out that mining plants using geothermal energy have already been installed in Iceland.

"The mining industry is in a state of flux after China's crackdown in June," say researchers at Britain's Cambridge University in a recent study.

But for the time being "we lack data to establish how the redistribution of mining activity affects the energy mix of the global grid," the researchers note, estimating the energy consumption of miners at 0.4 per cent of global electricity production.

"We are not reducing the energy supply of El Salvador, on the contrary, we are increasing it, and from the amount that we have increased, we have taken these 1.5 megawatts to start this first step with mining,” Daniel Alvarez, president of for the Rio Lempa Hydroelectric Executive Commission (CEL), argued.

Since September 7, El Salvador has been using Bitcoin as an official currency on a par with the US dollar. In an industry that still relies heavily on polluting coal-fired power plants, the government is touting the use of clean energy for local mining.

Since the legalisation of the cryptocurrency in the country, some 3 million of the 6.7 million Salvadorans have downloaded the government-launched Chivo app for Bitcoin transactions, according to official data.

But the policy of 40-year-old president Bukele is also opposed by some Salvadorans who denounce an "authoritarian government" and "bad ideas that harm the economy, like Bitcoin".