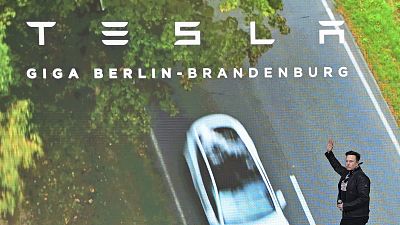 Germany's automotive industry - whose gross production value is worth nearly €500 billion a year - is bracing for some bumps in the road ahead as global supply chains slowly grind to a halt.

The American electric car company hopes to start production of the Model Y at the sprawling new production site outside the capital Berlin before the end of the year.

But disrupted global supply chains are slowing down production lines across Germany.

"The problem is severe. Eight out of ten companies, across all sectors, are reporting that they have been hit," Volker Treier, head of international trade at German chambre of commerce, said.

"And what is especially problematic is that nearly 50 per cent of all companies say that because of delivery bottlenecks in important materials: raw materialS, industrial products... they have had to decline contracts or slow down production".

It is of course a global problem but the global nature of Germany’s economy means it could face far greater hardships that other countries.

"The German economy is internationally connected - like no other national economy of a similar size," said Treier.

"Our export quota is around 50 per cent of the Gross National Product. In Japan for example it’s not even 20 per cent. So of course, in a situation like this, it makes us vulnerable".

Germany’s economy is often called the engine of Europe. The hope was that after the COVID-19 pandemic’s grip on the economy loosened, that engine would quickly shift into gear but supply chain problems have thrown sand into those gears.

"The delivery bottlenecks are a problem for recovery. We are in recovery, but it is significantly slower than it could have been," Treier added.