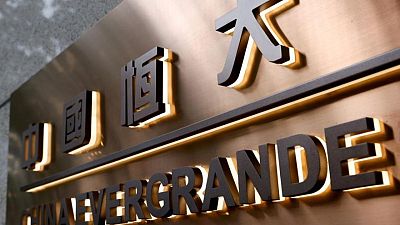 <div> <p>By Clare Jim, Svea Herbst-Bayliss and Andrew Galbraith</p> <p><span class="caps">HONG</span> <span class="caps">KONG</span> – Developer China Evergrande Group has made an interest payment for an offshore bond before a grace period expired on Friday, two people with direct knowledge of the matter said, narrowly averting a catastrophic default for the second time in a week.</p> <p>Evergrande, once China’s top-selling developer, is reeling under more than $300 billion in liabilities, fuelling worries about the impact of its fate on the world’s second-largest economy as well as on global markets.</p> <p>The property developer, which staved off a default last week by securing $83.5 million for the last-minute payment of interest on a bond, needed to make $47.5 million in coupon payments to bondholders by Friday.</p> <p>A failure to pay by the Friday deadline would have triggered cross-defaults on all of the company’s $19 billion worth of bonds in international capital markets, in what would have been the world’s second-largest emerging market corporate debt default.</p> <p>Evergrande did not respond to Reuters’ request for comment. The people declined to be identified due to the sensitivity of the matter.</p> <p>Reuters was not able to determine the source of the funds used to make the interest payments. Bloomberg News reported earlier this week that Chinese authorities had urged Evergrande’s founder, Hui Ka Yan, to pay the developer’s debts out of his personal wealth.</p> <p>Shares of Evergrande gave up early gains to fall about 0.8% by late morning on Friday, versus a 0.3% decline in the Hang Seng Index. The Hang Seng Mainland Properties Index fell about 0.9%, while an index of developers’ mainland A-shares dropped 3.6%.</p> <p>Prices of the developer’s bonds jumped higher on Friday, with its 11.5% January 2023 bond surging more than 9%, and its 12% January 2024 bond up nearly 8% on the day, data from Duration Finance showed.</p> <p>That still left them trading at discounts of more than 75% from their face value, with the 2023 bond yielding nearly 190%.</p> <p>One bondholder said he maintained a negative outlook for the developer despite it making the coupon payment.</p> <p>“I only think they are buying time at this point,” the bondholder said.</p> <p>Evergrande missed coupon payments totalling nearly $280 million on its dollar bonds on Sept. 23, Sept. 29 and Oct. 11, beginning 30-day grace periods for each.</p> <p>It still has nearly $338 million in other offshore coupon payments coming due in November and December.</p> <p>The New York Times earlier reported https://www.nytimes.com/live/2021/10/28/business/news-business-stock-market that the developer made an interest payment, citing a person speaking on condition of anonymity.</p> <p>“Evergrande has tried its best to solve liquidity problems, but it’s a little bit difficult to gather enough capital to pay all the debt,” said Cliff Zhao, chief strategist at China Construction Bank International in Hong Kong.</p> <p>“I think there (will) be some negotiations between Evergrande and its lenders, so some sort of haircut is still possible. The market still needs some time to digest and to price this in.”</p> <p><span class="caps">DEBT</span> <span class="caps">CRISIS</span></p> <p>Evergrande’s woes have snowballed for months and its dwindling resources set against its vast liabilities have wiped out 80% of its value, leading some analysts to consider default at some point inevitable.</p> <p>Even as Evergrande secures funds to make payments, other Chinese developers whose fortunes have been hit by market concerns over Evergrande’s debt crisis have slid into formal default.</p> <p>Fantasia Holdings Group Co Ltd, Sinic Holdings (Group) Co Ltd, China Properties Group Ltd and Modern Land (China) Co Ltd have all defaulted on dollar debt obligations this month.</p> <p>Other developers with significant dollar debt have proposed extending offshore bond maturities or undertaking debt restructuring in a meeting with regulators, sources have said.</p> <p>In a meeting with developers this week, China’s National Development and Reform Commission (<span class="caps">NDRC</span>) and the State Administration for Foreign Exchange told developers facing large offshore debt maturities to evaluate repayment risk and report difficulties.</p> <p>The <span class="caps">NDRC</span> also implored developers to meet offshore debt obligations, and maintain their reputations and market order.</p> <p>“Selective defaults in the offshore market are emphatically not acceptable for the authorities, and the <span class="caps">NDRC</span> clarification this week should reassure offshore investors that they will be treated fairly alongside onshore investors,” <span class="caps">DBS</span> strategist Wei Liang Chang said in a client note.</p> <p>Even developers who have not defaulted have seen their share and bond prices walloped. On Friday, Chinese Estates Holdings Ltd said it would book an aggregate loss of HK$1.36 billion in the current fiscal year from the sale of all of its bonds issued by peer Kaisa Group Holdings Ltd.</p> <p>Concerns over the systemic impact of a default by Evergrande have widened spreads on Chinese high-yield dollar debt to record levels as investors demand higher risk premiums.</p> <p>Investor worries have also kept the cost of insuring against default on China’s sovereign debt elevated. That cost earlier this month touched its highest level since the height of the pandemic in 2020.</p> <p><span class="caps">BANK</span> <span class="caps">EXPOSURE</span></p> <p>Founded in Guangzhou in 1996, Evergrande epitomised a freewheeling era of borrowing and building. But that business model has been scuttled by hundreds of new rules designed to curb developers’ debt frenzy and promote affordable housing.</p> <p>Any prospect of Evergrande’s demise raises questions over the fate of more than 1,300 real estate projects it has ongoing in some 280 cities.</p> <p>Bank exposure to developers is also extensive.</p> <p>A leaked 2020 document, branded fake by Evergrande but taken seriously by analysts, showed the developer’s liabilities extended to more than 128 banks and over 121 non-banking institutions.</p> <p/> </div>