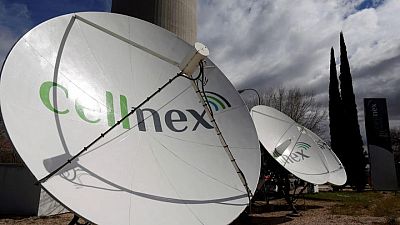 <div> <p>By Joan Faus</p> <p><span class="caps">BARCELONA</span> -Europe’s largest mobile phone tower operator Cellnex stuck to its outlook on Thursday as core earnings in the first nine months rose by 59%, outweighing a net loss which widened by 73% to 145 million euros ($169 million).</p> <p>Telecom towers have been the target of several big takeovers in recent years as Spain’s Cellnex and U.S.-based American Tower Corp race to increase their European footprint with a focus on the roll-out of next-generation 5G technology. </p> <p>Cellnex currently plans to control around 130,000 masts in Europe by 2030, once its announced acquisitions are finalised.</p> <p>But its portfolio could potentially grow to around 200,000 sites once 5G is fully implemented thanks to new acquisitions, its chief executive Tobias Martinez said in a call with analysts, without giving any timeline.</p> <p>After completing a 7 billion euro capital raising in April, Cellnex has said it plans to spend up to 9 billion euros on acquisitions over the next year.</p> <p>Cellnex said its adjusted earnings before interest, tax, depreciation and amortisation (<span class="caps">EBITDA</span>) rose to 1.3 billion euros while revenue grew 53% to 1.7 billion euros thanks to a rapid expansion, led by its services to mobile operators division.</p> <p>Finance chief Jose Manuel Aisa said the “very good results” showed a continuous trend in core earnings and revenue growth, adding that Cellnex is sticking to its 2021 and 2025 guidance.</p> <p>In its latest 2021 outlook, Cellnex expects adjusted <span class="caps">EBITDA</span> of between 1.91 billion and 1.93 billion euros, with revenues of between 2.535 billion euros and 2.555 billion euros.</p> <p>For 2025, its <span class="caps">EBITDA</span> would exceed 3 billion euros and revenues would be above 4 billion euros.</p> <p>Aisa said Cellnex’s increasing net loss was the result of it being a long-term investor with a prudent accounting approach.</p> <p>He told Reuters that any potential new acquisition must take into account the 5G roll-out, adding Cellnex preferred to enter European countries where it is not present, such as Germany. </p> <p>Since listing in 2015, Barcelona-based Cellnex, which has a market capitalisation of around 37 billion euros, has invested heavily. At the end of September, it had around 90,000 sites in 12 European countries.</p> <p>It said on Thursday it had finalised its 5.2 billion euros acquisition of France’s telecoms tower company Hivory, which was announced in February, after the French competition authority approved it subject to the disposal of 3,200 masts, giving Cellnex access to three mobile operators there. </p> <p>Cellnex said net debt grew to 8.6 billion euros in the third quarter, from 6.5 billion euros at the end of 2020, while it had access to immediate liquidity of around 14.3 billion euros. </p> </div>