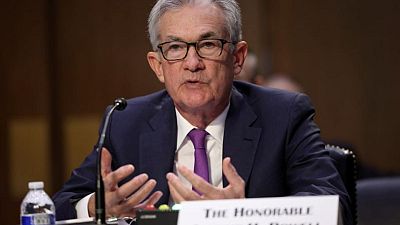 <div> <p> -U.S. President Joe Biden will probably advance a “whole slate” of nominees to the Federal Reserve Board, which may or may not include current chair Jerome Powell and will ensure a greater emphasis on workers, Senator Sherrod Brown said on Tuesday.</p> <p>In an interview with Bloomberg Television, Brown, the head of the Senate banking committee, said he had spoken with Biden “just the other day” about the makeup of the Federal Reserve board.</p> <p>The president understood that workers should be at the center of economic policy, which “includes making the Fed look more like America but think more like America too,” said Brown, adding that he gets along well with Powell but the decision on Powell’s renomination is Biden’s.</p> <p>The Senate banking committee oversees the Fed and must sign off on Fed nominees before they can be considered for approval by the Senate as a whole. </p> <p>Powell’s term as Fed chair expires in February; the seven-member Fed Board also has one vacant seat and at least one and potentially two other seats that will open up in coming months.</p> <p>“When the president looks for making up to four nominations – maybe including Powell, maybe not – there will be a much great emphasis on workers,” Brown told Bloomberg TV.</p> <p>The White House has not chosen any fixed timetable for Biden to make a decision on Fed personnel, a process delayed by congressional negotiations over his signature economic revival package. </p> <p>“We know there are going to be vacancies on the Fed Board of Governors – we need a full board of governors at the Fed,” a spokesperson for Brown said.</p> <p>Despite a time crunch to seal that deal, administration officials have been discussing their options for Fed appointments in recent weeks, according to a person familiar with the matter.</p> <p>The question of who should run the Fed comes at a critical moment for the U.S. economy. </p> <p>Central bankers have signaled they will begin reducing their support for the economy next month by cutting back what is currently $120 billion in monthly asset purchases down to nothing by the middle of next year. </p> <p>Policymakers are divided on how soon after that they will need to start putting the brakes on economic growth with interest rate hikes, with much depending on whether currently high inflation has begun to subside as many expect, as well as who is on the rate-setting committee by that time. </p> <p>Two of the most hawkish of the Fed’s 12 bank presidents, who along with the Fed Board decide on monetary policy, resigned last month amid an outcry over their securities trading. </p> <p>In response, Powell tightened restrictions on policymakers’ investing, although some critics see the scandal as one more reason to pick someone else to run the Fed.</p> <p>Some progressives favor current Fed Governor Lael Brainard to take over. </p> <p>Others who support keeping Powell in his current role say Brainard could make her mark on both climate and regulation if she takes over as the Fed’s regulation czar, a slot that opened up earlier this month after Randal Quarles’ term expired. </p> <p>“That position is really really really important,” Brown said of the vice chair for supervision role, adding that he’s spoken with Biden about “a couple” of people he would support for the job. </p> <p>Brown said that though Powell has “done some things that I think are too supportive of Wall Street when it comes to deregulation, and he is not engaged enough on climate,” he has done a “reasonably good job on monetary policy.”</p> <p>Brown’s remarks contrasted sharply with those of Senator Elizabeth Warren, who is also on the banking committee and has said she will oppose Powell’s renomination, citing what she sees as his weak record on regulation. </p> <p>On the weekend Treasury Secretary Janet Yellen defended Powell’s regulatory record, though she declined to say what advice she was giving Powell on the issue.</p> </div>