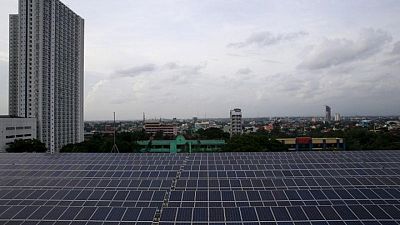 <div> <p>By Koustav Samanta and Fathin Ungku</p> <p><span class="caps">SINGAPORE</span> -Southeast Asian nations are speeding up their plans to transmit renewable energy through a proposed regional power grid, with first trials set for 2022, as the area strives to meet climate change targets, government and company officials said. </p> <p>Some members of the Association of Southeast Asian Nations (<span class="caps">ASEAN</span>) are also exploring carbon capture storage (<span class="caps">CCS</span>) technology to reduce emissions, officials said at this week’s Singapore International Energy Week conference. <span class="caps">ASEAN</span> has proposed that 23% of primary energy come from renewable sources by 2025.</p> <p>The announcements come ahead of the U.N. COP26 climate summit starting on Oct. 31 in Glasgow, considered one of the last opportunities for countries to announce firm targets for cutting emissions this decade. </p> <p>“We’ve heard some very positive announcements in terms of investments going into renewables,” Gauri Singh, Deputy Director-General of the International Renewable Energy Agency (<span class="caps">IRENA</span>) said.</p> <p>“<span class="caps">ASEAN</span> are really looking at bringing in almost one-quarter of the energy from renewables by 2025 — that’s a very ambitious goal that they’ve set for themselves, but I think the international cooperation, and regional cooperation are going to play a very, very important role.”</p> <p>Singapore will start importing renewable electricity from Malaysia by 2022 and later that year utilities in <span class="caps">ASEAN</span> will start transmitting the first 100 megawatts (MW) of electricity under a Laos-Thailand-Malaysia-Singapore power integration project as part of a regional grid project.</p> <p>The <span class="caps">ASEAN</span> grid, an idea first proposed in 1999 to enhance regional energy security, will now facilitate renewable power transmission. Australia has also been tapped for its green energy supplies with plans to export to Singapore.</p> <p>“With the power sector accounting for almost a quarter of global emissions, decarbonising electricity generation is at the core of the global climate change effort,” Gan Kim Yong, Singapore Minister for Trade and Industry said in a speech at the event.</p> <p>Singapore, which depends on natural gas for almost all of its power generation, plans to import up to 4 gigawatts (GW) of low-carbon electricity by 2035, or about 30% of its total supply. </p> <p>Singapore’s Sunseap Group and Sembcorp Industries and Indonesia’s <span class="caps">PLN</span> Batam and PT Trisurya Mitra Bersama (Suryagen) signed agreements this week on new solar power projects. </p> <p>Singapore plans to also launch standards and guidelines for renewable energy certificates that will allow companies to buy credits that verify their power is from renewable sources.</p> <p>Still, many <span class="caps">ASEAN</span> countries must address their reliance on fossil fuels in their power generation mix to meet their climate targets. </p> <p>For countries that are still heavily dependent on coal for power, <span class="caps">CCS</span> could be a solution in reducing emissions, said Arifin Tasrif, Indonesia’s minister of energy and natural resources.</p> <p>“The <span class="caps">ASEAN</span> region is still in some ways dependent on coal power… this situation must be carefully considered when setting our path towards carbon neutrality, and significant efforts should be made,” Tasrif said.</p> <p>Carbon capture technology is very important for Indonesia’s strategy to reach its net-zero emissions goals, and the country will start using it by 2030, he said. </p> <p>Exxon Mobil Corp is pursuing <span class="caps">CCS</span> hubs across Asia and has started talks with countries on potential storage options for carbon dioxide.</p> <p>To be sure, the region will still require further regulations and massive investments in upgrading and connecting grids across borders.</p> <p><span class="caps">ASEAN</span> will need at least $367 billion in the next five years to finance its energy goals, <span class="caps">ASEAN</span> Secretary General Lim Jock Hoi said.</p> <p>The bloc needs to improve its investment environment and also expand beyond its current sources of finance to reach its energy transition targets, he added.</p> <p>“Much remains to be done,” Lim said. “(There is a) need to improve the investment environment for energy transition, and to expand beyond our current sources of finance.”</p> </div>