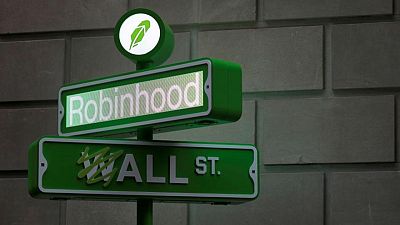 <div> <p>By John McCrank and Noor Zainab Hussain</p> <p> -Robinhood Markets Inc’s shares fell below their initial public offering price in after-hours trading on Tuesday after the retail broker reported softer revenue than expected for the third quarter as trading levels declined for cryptocurrencies like dogecoin.</p> <p>Shares of Robinhood were down 8.77% at $36.10 following the release of the results, below the $38 they were priced at in the Menlo Park, California-based company’s July <span class="caps">IPO</span> and well below the $85 they hit in August.</p> <p>Robinhood, which owns the app that was at the center of January’s trading mania for so-called meme stocks, said in August it expected retail investors to take a breather https://www.reuters.com/technology/robinhood-revenue-more-than-doubles-crypto-trading-boom-2021-08-18 in the third quarter. </p> <p>The slowdown in retail trading, one of the standout market trends of the <span class="caps">COVID</span>-19 era, comes as vaccine rollouts in the United States have helped allow the country to ease pandemic restrictions and activities like sports and other entertainment to resume.</p> <p>“Looking back at Q2, we saw a huge interest in crypto, especially doge, leading to large numbers of new customers joining the platform and record revenues,” Robinhood Chief Executive Officer Vlad Tenev said on a call with analysts.</p> <p>“In Q3, crypto activity came off record highs, leading to fewer new funded accounts and lower revenue.”</p> <p>Last quarter, trading in dogecoin – a token started as a joke – made up 62% of Robinhood’s cryptocurrency transaction volume.</p> <p>Crypto revenue rose 860% from a year earlier to $51 million, but was 78% off its second quarter level, Robinhood said. </p> <p>Equities trading revenue fell 27% from a year ago to $50 million. </p> <p>Total revenue rose 35% from a year earlier to $365 million. </p> <p>Analysts had expected revenue of $431.38 million, according to <span class="caps">IBES</span> data.</p> <p>Robinhood said it had 22.4 million funded accounts, down slightly from last quarter, but up 96.5% from a year earlier.</p> <p>The retail trading slowdown has carried over into the current quarter, Robinhood said.</p> </div>