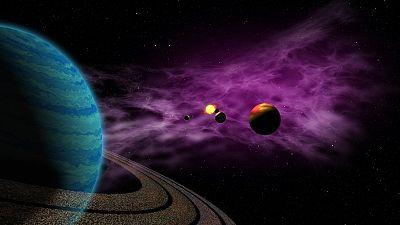 A depiction of exoplanets in a foreign solar system with a sun star; this new exoplanet has been found in an entirely different galaxy.   -   Copyright  Arkadiusz Wargula from Getty Images / Canva
By Amber Bryce  •  Updated: 27/10/2021

Located some 28 million light-years away from the Milky Way, astronomers may have just discovered the first planet outside of our galaxy.

The Saturn-sized exoplanet was detected by astronomers using Nasa's Chandra X-Ray Telescope and found to be located in the Messier 51 whirlpool galaxy, orbiting both a dead star and a massive star.

Over 4,800 planets have previously been discovered orbiting other stars instead of the sun, but they're all located inside the Milky Way galaxy.

These new findings have been documented in the journal Nature Astronomy, and suggest there could be many more extragalactic exoplanets out there, waiting to be found.

Exoplanets can be extremely difficult to spot with telescopes due to the bright glare of the stars that they orbit, so astronomers instead look for stars exhibiting effects.

“One way to search for exoplanets is to look for "wobbly" stars. A star that has planets doesn’t orbit perfectly around its center. From far away, this off-center orbit makes the star look like it’s wobbling,” Nasa reports.

For this particular study, astronomers found their results based on the transit method, which can be explained as when a planet passes in front of its star, a little of the star’s light is blocked allowing telescopes to detect a dim in brightness.

Monitoring changes in the star’s brightness can also help to determine the size of the orbiting exoplanet, and how far away it is from its star.

A key technique known as X-ray binaries was used to detect this new exoplanet.

X-ray binaries can be uncovered when a neutron star or black hole steals material from a closely orbiting living star, becoming superheated to the point of emitting bright X-rays. This makes it easier for astronomers to spot a potential planet’s presence with the dimming of light as it’s in transit.

The X-ray transit for this particular exoplanet lasted about three hours, during which the X-ray emission decreased to zero.

It has been suggested that the dimming of light observed could have been caused by a cloud of gas or dust passing in front of the X-rays, although the study’s authors said this explanation is not consistent with their data.

While X-rays have been successful at helping to identify exoplanets within the Milky Way, they’re less equipped to look beyond at other galaxies, with greater distances reducing the amount of light that reaches the telescope.

The study’s data also suggests it takes about 70 years for the exoplanet to pass in front of its binary partner again, meaning it won’t be observable to study again for a long time.

"We know we are making an exciting and bold claim so we expect that other astronomers will look at it very carefully," said study co-author Julia Berndtsson of Princeton University, New Jersey.

"We think we have a strong argument, and this process is how science works."