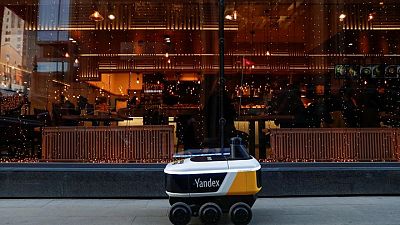 <div> <p><span class="caps">MOSCOW</span> – Self-driving robots have started delivering parcels in certain Moscow neighbourhoods after tech giant Yandex teamed up with the state-run Russian Post service, the companies said on Monday. </p> <p>Yandex, which operates a raft of services from online search to ride-hailing, already uses robots for food delivery in Russia and on some U.S. college campuses in a partnership with GrubHub, but a tie-up with the federal post service could widen their reach.</p> <p>In a joint statement, Yandex and Russian Post said 36 rectangular, suitcase-sized robots would initially deliver from 27 post offices in several districts of the Russian capital as part of a pilot project, with parcel recipients able to select robot delivery using an app. </p> <p>Users can track the six-wheeled, black and white robots as they trundle across town and can access their parcel using a unique verification code. </p> <p>“Every part of the logistics chain can be automated, and technologies are changing processes at every stage: from the first to the last mile,” said Stanislav Chernin, head of innovation at Russian Post.</p> <p>Russian Post has over 38,000 branches across the world’s largest country and handles more than 108 million parcels each year.</p> <p/> </div>