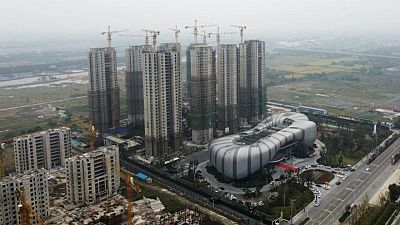 <div> <p>By Marc Jones and Andrew Galbraith</p> <p><span class="caps">LONDON</span>/SHANGHAI – Investors who have watched China’s property sector crisis play out in recent months have just been denied their Evergrande grand finale as the world’s most indebted developer dodged a $19 billion default, but they might not have too long to wait.</p> <p>China Evergrande Group’s woes have been snowballing for months. Dwindling resources set against 2 trillion yuan ($305 billion) of liabilities have wiped out 80% of its value this year, and there is still a stream of bills to be paid.</p> <p>Economists are worried an implosion of the super-sized builder may be impossible to control, toppling other developers and turning an already-defining crisis for the world’s second largest economy into a full-blown disaster.</p> <p>For now, its decision to transfer the $83.5 million needed to pay a month overdue bond coupon has staved off disaster.</p> <p>“There is a positive out of this, they have not defaulted,” said Himanshu Porwal, corporate credit analyst at Seaport Global in London.</p> <p>“But they are not out of the woods. There is a huge ticking time bomb of $37 billion of short-term debt.”</p> <p>Evergrande still needs to make overdue coupon payments of $195 million, with the next major deadlines to avoid default on Oct. 29 and Nov. 10. It then has a further $340 million of international market bond payments due this year and another $6.1 billion next year, plus tens of billions for local bonds and bank loans.</p> <p>A number of smaller developers have already been forced to the wall, and with roughly a third of the sector’s $232 billion of cross-border bonds needing to be refinanced by the end of next year according to Fitch, borrowing markets need to be prised back open.</p> <p>That requires confidence, which has been almost completely drained by the Evergrande saga. If the company is to survive it will need to quickly sell its assets, which will be tricky.</p> <p>Just this week a $2.6 billion stake sale fell through and plans sell its Hong Kong headquarters have also collapsed.</p> <p>Still, Hayden Briscoe, head of Asia-Pacific fixed income at <span class="caps">UBS</span> Asset Management, thinks Evergrande’s assets are still worth more than its battered bond prices of 20-27 cents on the dollar reflect.</p> <p>“The surprise factor here is actually skewed in the opposite direction, upside surprise.”</p> <p><span class="caps">LEHMAN</span> <span class="caps">MOMENT</span> </p> <p>Omotunde Lawal, head of emerging-markets corporate debt at asset manager Barings, said the darkest moment was when amid the Evergrande turmoil, another sizable property firm, Fantasia, defaulted out of the blue.</p> <p>Although the worst of the rout has been mainly confined to Asia’s high-yield markets, the risk premiums, or spread, investors were demanding to hold Asian property firms’ bonds rocketed to an almost unprecedented 1200 basis points.</p> <p>“It felt like we were back at a Lehman sort of moment,” Lawal said, referring to the collapse of the investment bank in 2008. “So it gives you a sense for just how much capitulation and how much destruction there was in the real estate sector.”</p> <p/> <p>Graphic: Evergrande would be second biggest EM corporate default https://graphics.reuters.com/EMERGING-<span class="caps">DEFAULTS</span>/movanjdlrpa/chart.png</p> <p/> <p><span class="caps">GAME</span>-<span class="caps">CHANGER</span></p> <p>Founded in Guangzhou in 1996, Evergrande epitomised China’s freewheeling era of borrowing and building, now brought to an end by hundreds of new rules designed by Beijing to curb developers’ debt frenzy and promote affordable housing.</p> <p>Analysts say the bigger picture now is what happens to Evergrande’s assets and the more than 1,300 real estate projects it has in over 280 cities, and the impact on the wider property sector that accounts for a quarter of China’s economy should it default or restructure. </p> <p>A leaked 2020 document, written off as a fabrication by Evergrande but taken seriously by analysts, showed liabilities extending to more than 128 banks and more than 121 non-banking institutions.</p> <p/> <p>Graphic: Evergrande crisis causes major property sector bond sell off https://fingfx.thomsonreuters.com/gfx/mkt/xmvjolqqopr/Pasted%20image%201634852333461.png</p> <p/> <p>Evergrande’s woes have also reignited the debate about whether some Chinese firms are really too big to fail, especially after Beijing’s clampdowns on tech giants like Alibaba and Tencent wiped nearly a trillion dollars off its markets earlier this year. </p> <p>Amundi’s Co-Head of EM Corporate & EM High Yield, Colm d’Rosario said both cases show the government’s focus is now on “common prosperity” while its acceptance of uninhibited corporate debt accumulation has changed. </p> <p>Debt analysts hope any damage from Evergrande might not be too widespread. Although China accounts for just over a quarter of <span class="caps">JPM</span>organ’s $1.4 trillion <span class="caps">CEMBI</span> index, a benchmark for emerging market corporate debt buyers, just $6.75 billion of Evergrande’s $19 billion of international bond debt is included.</p> <p>“If you had an assumption of too big to fail in a high-yield sector, You didn’t think about it properly,” said veteran emerging market crisis watcher Jeff Grills, who heads EM fixed income at U.S. fund Aegon Asset Management.</p> <p>“China’s government has wanted to see excess risk controlled and they also do not want to see a property bubble.” </p> <p>He said that while some money managers may recalibrate their risk metrics, the current crisis shouldn’t put people off investing in China altogether.</p> <p/> <p>Graphic: Evergrande woes remained contained in Chinese high-yield sector https://fingfx.thomsonreuters.com/gfx/mkt/akvezajjypr/Pasted%20image%201634859714752.png</p> <p/> <p/> </div>