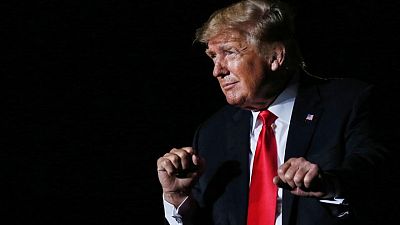 <div> <p>By Medha Singh and Sinéad Carew</p> <p> – Shares of the blank-check acquisition company that plans to publicly list former U.S. President Donald Trump’s new social media venture soared again on Friday, more than doubling in value with trading halted multiple times due to volatility.</p> <p>Digital World Acquisition, a Miami-based special purpose acquisition company (<span class="caps">SPAC</span>), closed up 107% at $94.20 on Nasdaq after earlier hitting a high of $175.</p> <p>Digital World soared more than 350% on Thursday, a day after the deal was announced, giving it a market capitalization of almost $1.5 billion on news it would merge with Trump’s media company to create a social media app called <span class="caps">TRUTH</span> Social.</p> <p>Its recent trading was reminiscent of the meme stock frenzy earlier this year, when an army of retail investors coordinated on online forums to drive shares of GameStop Corp, <span class="caps">AMC</span> Entertainment Holdings and other stocks.</p> <p>“This feels like a meme stock. This looks like <span class="caps">AMC</span> and GameStop all over again,” said Joe Saluzzi, co-manager of trading at Themis Trading in Chatham, New Jersey. </p> <p>Data from brokerage Fidelity showed Digital World was the most traded stock on its platform on Thursday. It was the most discussed stock on trading-focused social media site Stocktwits, a platform commonly seen as a measure of interest from retail investors. Message volumes on Stocktwits related to the <span class="caps">SPAC</span> were up more than 9,000%.</p> <p>Social media giants suspended Trump’s accounts after his supporters rioted at the U.S. Capitol on Jan. 6. In a press release announcing the deal, Trump said, “I’m excited to soon begin sharing my thoughts on <span class="caps">TRUTH</span> Social and to fight back against Big Tech.”</p> <p>With almost 500 million shares changing hands on Thursday, Digital World topped GameStop trading volume of 197 million at the peak of the meme stock frenzy in January.</p> <p>The stock traded about 130 million shares on Friday, surpassing the free float of 22.8 million shares, based on Refinitiv data.</p> <p>“There’s a tremendous amount of Trump supporters in the country who are going to just clamor to get some exposure to Donald Trump in whatever way they can,” said Eric Diton, managing director of investment advisory firm The Wealth Alliance.</p> <p>The shares of at least one other company linked to the Republican former president also saw large gains. Phunware Inc, a software company hired by Trump’s 2020 presidential re-election campaign to build a phone app, had its share price rise as much as 1,471% on Friday. It closed up around 471% at $8.74.</p> <p>Hedge funds that invested in Digital World are set to make five times their investment, regulatory filings showed, while Patrick Orlando, who backs the <span class="caps">SPAC</span>, is likely to see a $420 million windfall from the surge in shares.</p> <p>But not all were buyers. Hedge fund manager Boaz Weinstein said that he sold his firm Saba Capital Management’s holdings in Digital World early on Thursday as news emerged that it was merging with Trump’s new media venture.</p> <p>“I knew that for Saba the right thing was to sell our entire stake of unrestricted shares, which we have now done,” Weinstein said in a statement. “Many investors are grappling with hard questions about how to incorporate their values into their work. For us, this was not a close call.”</p> <p>Trump Media and Technology Group said it would receive $293 million in cash that Digital World had in a trust if no shareholder of the acquisition firm chose to cash in their shares.</p> <p/> </div>