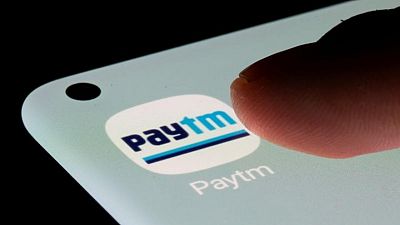 <div> <p>By Sankalp Phartiyal</p> <p><span class="caps">NEW</span> <span class="caps">DELHI</span> – Indian fintech firm Paytm has received approval from the capital markets regulator for its $2.2 billion stock market listing that is likely to be India’s biggest ever <span class="caps">IPO</span>, a source familiar with the matter told Reuters on Friday.</p> <p>Paytm was planning its initial public offering for around the end of October, Reuters previously reported.</p> <p>The company, whose backers include Ant Group, SoftBank’s Vision Fund and Berkshire Hathaway, narrowed its operating loss to 16.55 billion rupees ($221.00 million) in the financial year that ended in March 2021, from 24.68 billion a year earlier. A source told Reuters in July that Paytm was likely to break even in 18 months.</p> <p>Several first-generation homegrown startups in India are preparing to go public on domestic bourses, following on the heels of food delivery firm Zomato which made a stellar stock market debut in July and which also counts China’s Ant Group as a shareholder.</p> <p>Ant Group, with a roughly 30% stake, is Paytm’s largest shareholder.</p> <p>Launched a decade ago as a platform for mobile recharging, Paytm grew quickly after ride-hailing firm Uber listed it as a quick payment option. Its use swelled further in 2016 when a ban on high-value currency bank notes boosted digital payments.</p> <p>Paytm has since branched out into services including insurance and gold sales, movie and flight ticketing, and bank deposits and remittances.</p> <p>($1 = 74.8880 Indian rupees)</p> <p/> </div>