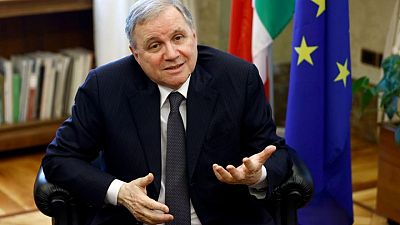 <div> <p><span class="caps">ROME</span> – The European Union should consider creating a sinking fund to manage public debt accumulated by member states during the <span class="caps">COVID</span>-19 pandemic in the last two years, European Central Bank governing council member Ignazio Visco said on Thursday.</p> <p>“The pandemic showed the limits of the current European Union without a common budgetary capacity,” the Bank of Italy governor said at an annual ‘World Savings Day’ event.</p> <p>Visco said that after the crisis Italy should speed up the reduction of its public debt burden to avoid future risk of instability.</p> <p>“If the economy continues to perform better than expected, it will be important to take advantage of this to reduce the deficit,” he said.</p> <p>He also said supply bottlenecks were starting to affect Italy and warned that the impact could weigh on prices and production for longer than expected.</p> <p>He added that bank deposits held by households and businesses had increased by 200 billion euros ($232.80 billion) during the pandemic, but said this cash mountain would decline as consumption recovered. </p> <p>($1 = 0.8591 euros)</p> <p/> </div>